The training programme initiated by the European Festivals Association (EFA) is hosted by the Edinburgh International Festival (EIF) and takes place 3-10 April 2014. It brings together 52 young festival managers from 28 countries and 9 renowned festival directors from all over the world.

In an inspiring presentation, Joseph V. Melillo introduced the Brooklyn Academy of Music (BAM) and its unique history as a pioneer in festival life. In his speech he underlined the importance of engaging the community and of investing into their creative imagination.

In his welcome address, Sir Jonathan Mills remembered Gerard Mortier and his generosity and engagement for young festival mangers as a presenter at previous Ateliers. Referring to the motto of the Atelier coined by Bernard Faivre d’Arcier, former long-standing Director Avignon Festival, President Lyon Biennial: “The true role of a festival is to help artists to dare, to engage in new projects,” Jonathan added: “Think about what you dare, and dream on behalf of the imagination of your audience and the community in which you will find yourself as young curators.”

Kathrin Deventer said: “The Atelier it is a moment of surprises, of confrontation, of controversy, of radically different perspectives, of exchanging challenges each of you is facing, of overcoming one’s own limits and visions; of opportunities to share our ideas, our perception of festivals, and our role in society, at a given time, in a given space in this world.”

EFA President Darko Brlek sent his greetings from Ljubljana, where the previous Atelier took place. He quoted Marina Abramović, one of the most famous contemporary artists in the world, who said: “A great artist has to be ready to fail.” And added: “As curators and cultural managers you will fail. Don’t be afraid to. It’s important that you have the courage to never stop believing that our lives would be boring and empty without culture.”

The Atelier EDINBURGH 2014 will close with a public session on Wednesday 9 April 2014 at 18:00 at The Hub, including a lecture by theatre critic and columnist Joyce McMillan. If you would like to attend, please RSVP to Niall Heseltine (EIF) asap (contact: niall.heseltine@eif.co.uk). 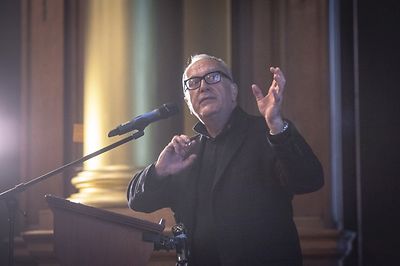