The Audience Participation Working Group of the Access to Culture Platform announces its second publication called “The Decisive Deal: Access to Culture, Access to Europe.” Last year the working group launched a publication series on the Cultural Component of Citizenship. This year, it has worked to develop a new publication exploring the role of culture in Europe during the next 5-year EU political term.

Through the Access to Culture Platform, the Audience Participation/Cultural Component of Citizenship Working Group is striving to inspire citizens to exercise their cultural rights through active participation in the shaping of Europe. It is important that participation in culture is recognised as a fundamental right and a stepping stone to gaining political and social objectives such as creative societies, a strong educational system, flourishing cultural industries, intercultural dialogue and democracy. Active citizenship requires that all levels of policy making take citizens’ concerns into account.

The articles discuss the role that culture play in citizenship across Europe and envision the mutual responsibility that culture and Europe bear towards one another as we move towards the historic 2014 European elections. We hope that these essays from various opinion-makers and civil-society leaders in Europe inspire you to actively participate in Europe and culture throughout 2014 and beyond. The essays contribute to the reflections and discussions taking part in the Cultural Coalition for a Citizens’ Europe and will serve as food for thought in the Berlin Conference 2014 and the new cycle of the European Parliament that will follow the May 2014 elections.

In the frame of the 2014 European Elections, the Access to Culture Platform will present the publication in various public occasions and discuss its contents with the broader public during the whole year and beyond. Partnering with the Cultural Coalition for a Citizens’ Europe, the Access to Culture Platform is glad to position its work in a broader framework, and join forces with initiatives that work in this field to come all together to a better understanding of citizenship and its cultural dimension for the benefit of European citizens.

Members of the ACP’s Audience Participation Working Group participated in both the Amsterdam Conversation 2013 and Brussels Conversations 2013 to discuss this issue. The publication was presented at the Berlin Conference 2014 to the leaders of the European political parties, including Martin Schulz (President of the European Parliament), José Manuel Barroso (President of the European Commission), Jean-Claude Juncker (European People’s Party), Rebecca Harms (The Greens/European Free Alliance), and Guy Verhofstadt (Alliance of Liberals and Democrats for Europe).

The Audience Participation Working Group would like to thank all authors and contributors to this publication. 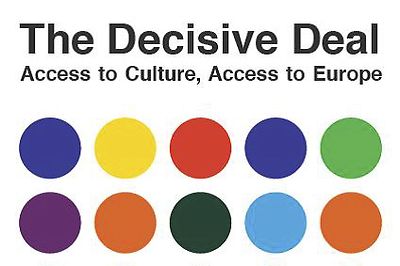