Abu Dhabi Music and Arts Foundation (ADMAF), the organisers of the Abu Dhabi Festival, are celebrating the resounding success of its 11th annual edition. Having welcomed world-class performers from jazz legend Herbie Hancock, to soprano superstar Renee Fleming and classical guitar sensation Milos Karadaglić, among many others, the Festival officially drew to a close on 4 April with a ceremony to recognise the legendary composer, musician and music mogul, Quincy Jones, with the prestigious 2014 Abu Dhabi Festival Award.

Mr Jones was awarded by the Festival for his lifetime contribution to arts and culture. In the course of his career, he has shaped music history alongside his ongoing work nurturing the Arab music industry through the Global Gumbo Group (G3), as well as fostering arts education across the Arab world through the charitable initiative, Bokra (Tomorrow).

Speaking at the award ceremony, Quincy Jones said: “I am overjoyed to be in Abu Dhabi to witness first-hand the passion and commitment this nation has towards nurturing and growing artistic talent in the region. I am honoured to have had the prestigious Abu Dhabi Festival Award bestowed upon me, and feel extremely proud that my work in the region is helping to hone the creative development of this culturally rich and talented nation.”

Following the award ceremony, H.E. Hoda I. Al Khamis-Kanoo, Founder of the Abu Dhabi Music & Arts Foundation (ADMAF) and the Abu Dhabi Festival said: “Abu Dhabi Festival 2014 has been an overwhelming success. I am overjoyed by the level of support we have received from performers, partners and the public which has made this edition the most successful ever. Having had the pleasure of witnessing so many talented performers both from the region and around the world, it is a wonderful feeling to bring this year’s Festival to a close by officially honouring the legendary musician, Quincy Jones, with the Abu Dhabi Festival 2014 Award.”

With 117 events and 35 productions spanning 35 venues over 29 days, Abu Dhabi Festival 2014 welcomed a large number of residents and tourists, young and old, to join as it celebrated the theme of ‘Creative Innovation’ across the UAE.

Celebrating Emirati art under the Creative Innovation theme, Abu Dhabi Festival 2014 presented numerous leading initiatives that brought together international and local artists, including: the legendary Herbie Hancock with Emirati artist Hamdan Al Abri, Renee Fleming with the first Emirati Soprano, Sara Al Qaiwani, and students of Bayt Al Oud Al Arabi performed Fairouz’s melody, ‘The People Asked Me’, as a prologue to Michel Fadel’s performance with Ahmed Sheikh on the zither, Ali Al Sheikh on the flute, and Sham Ghaleb Sloom on the oud, in a celebration of creativity that shines in the UAE.

Abu Dhabi Festival 2014 kicked off on January 27th with a very special Pre-Festival concert by Gustavo Dudamel and The Simon Bolivar Symphony Orchestra of Venezuela (SBSOV), which enthralled the Abu Dhabi audience with masterful renditions of works by Tchaikovsky and Beethoven as well as a crowd-pleasing, signature encore bursting with Latin-American rhythms.

From March 2nd – 31st The Story Mile in Khalifa Park took residents on a voyage of discovery with a new chapter in Emirati storytelling crafted by Zayed University students.

In an initiative that brought a fringe festival ambiance to Abu Dhabi, ADF 2014 created a series of laid-back events entitled The Space Sessions for young Emiratis and peers to share their creativity, ideas and artistic inventions. Hosted at ‘The Space’ twofour54 during March, the series enabled young people to express their creativity and their visions for the future, while giving them valuable access to established artists including Emirati soul singer, Hamdan Al Abri, acapella group SAMA Quartet, and Emirati actress Amel Al Marzooqi.

The main Festival programme commenced on March 17th with The Asil Ensemble for Arab Contemporary Music, who breathed new life into traditional Arabic music in their UAE debut. Part of ADF 2014’s Bayt Al Farabi series, the ensemble captured the spirit of the Festival with a performance that drew upon the cultural heritage of the region and made it relevant to audiences today.

On March 22nd, crowds were impressed and inspired by ADF 2014’s Young Musicians’ Concert, which saw young musicians from Abu Dhabi perform an original composition inspired by the UAE capital. The composition, written by the musicians with help from New York-based music ensemble Decoda during their 2014 Festival residency, was performed by members of the ensemble and the student orchestra during an evening concert at the Abu Dhabi Theatre.

Representing the first ever, solo classical guitarist to be featured at the Abu Dhabi Festival, Miloš Karadaglić charmed his audience with an intimate recital on March 26th. Proving why he is currently the hottest talent in classical music today, the talented young musician gave his audience an unforgettable performance of hypnotic musicality.

Continuing the tradition of presenting the world’s greatest ballet companies, the Abu Dhabi Festival 2014 welcomed the American Ballet Theatre who performed ‘Coppélia’ for the first time in the Arab World on March 28th & 29th. The company performed a magical, colourful and enchanting ballet that delighted the many families that made up the Abu Dhabi audience.

Brining the ADF 2014 main programme to a spectacular finale on March 31st, the award-winning Michel Fadel made his UAE debut in a traditional evening with an electronic twist. Prior to his performance, Michel Fadel gave a special performance for patients and staff at Sheikh Khalifa Medical City as part of the Festival’s Music In Hospital’s community programme.

The Abu Dhabi Festival is the UAE’s premiere cultural event; bringing the best in international and regional dance, opera, music, and visual arts to the Emirates each year. It looks forward to announcing its 12th edition later this year. 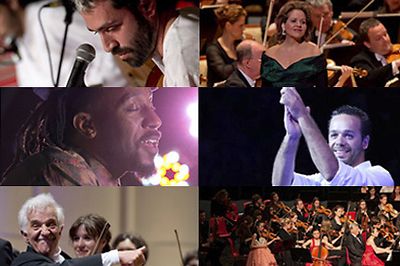