[PRESS RELEASE; Brussels/Edinburgh, 11 April 2014] The Festival Academy’s Edinburgh edition of the Atelier for Young Festival Managers, the training programme initiated by the European Festivals Association (EFA), took place 3-10 April 2014. Hosted by the Edinburgh International Festival (EIF), it brought together 51 young festival managers from 28 countries and 9 renowned festival directors from all over the world. They joined the growing network of 223 Alumni from 56 countries. The 7 days were full of thought-provoking exchanges and established sustainable ties for the future. The next opportunity for young festival leaders worldwide to participate in the Atelier is in Poznan in October 2014.

Mohamed El Ghawy, a participant from Egypt, said: “At the Atelier you learn from experienced mentors, festival pioneers; you hear inspiring stories from young festival managers from around the world; and you broaden your network. But the unique thing is that you get to know more about yourself.”

During the Atelier’s closing session on 9 April, renowned theatre critic and columnist Joyce McMillan underlined the important role of festivals in society, with the EIF being a perfect example as it achieved to transform the city and the nation: “The transformation of people is absolutely key to what a festival can do.” She urged participants “to find the art that will speak to the people; that will give them the ability and inspiration for a fuller life, more connected to humanity.”

Kathrin Deventer, EFA Secretary General, said: “The Atelier is not only there for the 51 young festival managers, but presenters also take a lot of inspiration home from the participants. Furthermore, it allows EFA to stay up-to-date with current trends and issues at stake for the world of festivals and young managers.” She thanked everybody involved in making the Atelier EDINBURGH 2014 a success: the Edinburgh International Festival, Creative Scotland, British Council Scotland, Institut Français Écosse, and all cultural institutes and venues in Edinburgh for their contribution.

Joanna Baker, Managing Director and Company Secretary Edinburgh International Festival, thanked the participants and presenters for their energy, passion and engagement. She said: “It was like a mini festival and it has been an absolute pleasure to host you.”

EDINBURGH 2014 confirmed the standard of excellence set in the previous editions, paving the way for the next Atelier in 2014 which will take place from 20 to 27 October 2014 in Poznan, Poland, in collaboration with the Malta Festival Poznan. Applications for the Atelier POZNAN 2014 must be submitted by 15 April 2014.

Hugo De Greef, General Coordinator of the Atelier, said: “The Atelier was established in 2006 based on a need to put the arts and artists as a central concern within the festival scene. Since then, the world has changed drastically. Accordingly, the future festival leaders we gather at the Atelier will adapt to these changes. The Atelier itself is affected and will adapt in an innovative way. EFA will continue to foster knowledge exchange among festivals all over Europe and beyond.”

The latest news, blogs, and more information can be found at www.TheFestivalAcademy.eu, www.facebook.com/AtelierForYoungFestivalManagers and www.festivalbytes.eu. 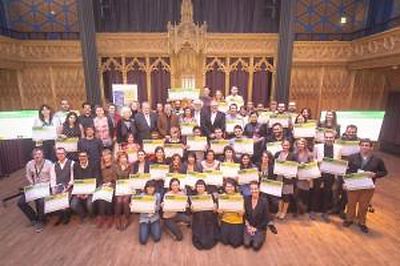