Here's a very simple message European cultural networks and organisations want to circulate to encourage citizens to use their right to vote and influence the future of Europe. All of them are concerned by the high rates of abstention during European elections (to be held between 22 and 25 May 2014) and the recent rise of extremism across Europe. These elections will – perhaps more than any previous EU elections – help decide the future direction of Europe. Some 350 million voters will have a say over how the EU should be governed for the next five years, including deciding who will become the next President of the European Commission. Cultural networks wish to contribute to the European debates and policies, defend democratic values and raise citizens' awareness of their power of decision.

Get advocacy material and in-depth information about the EU elections:

Get quick, reliable and easy to digest information about the EU elections:

This campaign is an initiative of European cultural networks and organisations: 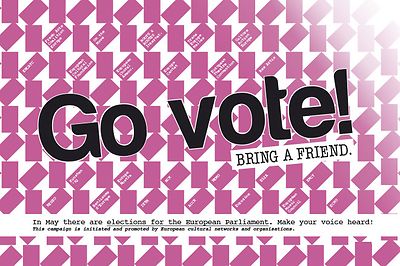