The European Festivals Association (EFA) and the Edinburgh International Festival (EIF) invite you to the launch of the 2014 Edinburgh International Festival in Brussels with Festival Director Sir Jonathan Mills. It takes place on Tuesday, 13 May 2014, 18:00, at the Kaaitheater (20 square Sainctelette) and includes a drinks reception. The launch is hosted by the Kaaitheater and the European House for Culture.

Edinburgh International Festival Director Sir Jonathan Mills will present the 2014 edition of the festival. Taking place from 8-31 August 2014, it will bring three spellbinding weeks of the very best in international opera, dance, music, theatre and the visual arts to Edinburgh.

The Brussels launch will include welcome addresses by Guy Gypens, Artistic Director of the Kaaitheater, and Kathrin Deventer, EFA Secretary General, time for exchange with the press and audience, as well as a welcome drink (18:00) and reception (19:30).

Sir Jonathan Mills said: “Presented almost exactly 100 years since the outbreak of the First World War, Festival 2014 is a compelling exploration of the impact of history, most especially during periods of warfare and unrest, and the immense influence exerted by a powerful few on issues of national identity, the forging of our cultures, and the lives of people throughout the world.”

The 2014 Festival will explore homages to heroism and the transcendence of tragedy from artists as diverse as Leonard Bernstein, Benjamin Britten, Gabriele D’Annunzio, Franz Josef Haydn, Gabriel García Lorca, Wilfred Owen, Olivier Messiaen, Giovanni Palestrina, Erich Maria Remarque and Virgil. The Festival also features artists and work from Australia, Canada, New Zealand and especially South Africa, this year celebrating the 20th anniversary of its democracy; all countries which share aspects of our history and traditions.

EFA President Darko Brlek said: “The European Festivals Association shares the belief in the transformational power of culture that manifests itself in the extraordinary programme of the Edinburgh International Festival. Just as EFA, the EIF has been committed to the European integration process for more than 65 years now.”

EFA Secretary General Kathrin Deventer said: “In the years to come EFA will be guided by the motto Rising to the Occasion and will continue to support festivals in being sustainable, influential, and innovative cultural actors in our ever-changing society. The Brussels event demonstrates perfectly the join mission of EFA and its members to promote the local and global significance of arts festivals and their role in European cultural cooperation.”

For many years, EFA and EIF have been closely collaborating: EIF hosted the recent edition of the Atelier for Young Festival Managers in Edinburgh (3-10 April 2014), and Sir Jonathan Mills has acted as a presenter in previous Ateliers. Furthermore, Sir Jonathan Mills represented EIF in the annual round table bringing together Androulla Vassiliou, European Commissioner for Education, Culture, Multilingualism and Youth, and some 25 directors of major festivals.

The event will also be the occasion to say thank you and good bye to Sir Jonathan Mills who took over the position as EIF’s Festival Director in 2006 and will step down after this year’s festival. Fergus Linehan, former director of the Sydney International Festival, will take over full time as of 1 October.

The 2014 festival programme was unveiled on 18 March in Edinburgh. Watch the Festival 2014 trailer and check out the programme brochure!

RSVP until 5 May 2014 to the European Festivals Association at eva@efa-aef.eu. 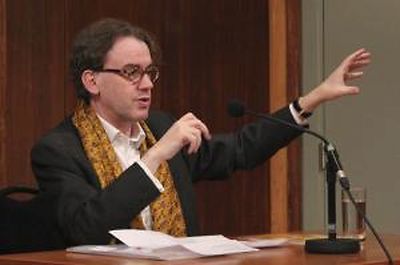