Young musicians can apply to the 2014 edition of the Enescu International Competition (6-27 September, Bucharest, Romania) until 1 July 2014. The Enescu Competition is organised according to international standards for musical contests, within the George Enescu Festival, a top 5 Festival in Europe, and offers prizes over 100.000 Euros. The Enescu Competition’s first edition was in 1958, when the Enescu Festival was first launched, in the memory of the famous Romanian composer, George Enescu. It reaches this year its 14th edition. The competition has been a member of the World Federation of International Music Competitions since 2002.

“Romania matters for the international career of young artists! This is the great opportunity that we provide to them, through the Enescu Competition. Over time, worldwide important musicians have engaged in successful international careers thanks to the spotlight and recognition granted by winning an Enescu Competition. To name just a few: the famous Romanian pianist Radu Lupu, who won the piano competition in 1967; the Georgian pianist Elisabeth Leonskaja – who won in the early days of her career (1964) the First Prize in the Piano Section at the George Enescu Competition –, Agnes Baltsa, Li Ming Qiang, Igor Aleksandrovich Frolov, Arie Vardi, Oleg Moiseevich Kagan, Pascal Mahé Rogé, Cristina Ortiz, Dmitri Alexseev or Valeriy Sokolov,” explains Mihai Constantinescu, Executive Director of both Enescu Festival and Enescu Competition.

The 2014 edition of the George Enescu Competition will take place between 6 and 27 September and has four sections: Violin, Cello, Piano and Composition. The prizes are worth over 100,000 Euros. The Competition is proud to use The Romanian Athenaeum and The National Music University – both symbolic places of Bucharest – as the performance venues for the preliminary stages of the Competition. The final concerts will be performed at The Romanian Athenaeum, with the George Enescu Philharmonic Orchestra.

The candidates can seek information about the rules for the 2014 Enescu Competition on the Enescu Festival website, following this link. The application form is available for download on this link. Should they need Enescu scores to prepare for the competition, they are kindly invited to contact the organisers (artexim@rdslink.ro).

Three famous musicians will conduct the finals of the 2014 edition. Marek Pijarowski, former Artistic Director of the prestigious National Philharmonic of Poland, will conduct the Violin Final. Pianist and conductor Justus Frantz, a close friend of legendary Leonard Berstein, will conduct the Piano Final. Ovidiu Bălan, one of the most sought-after conductors of Eastern European tradition will conduct the Cello Final of the Competition.

An unprecedented opening concert to celebrate laureates of the Enescu Competion

The 2014 edition also establishes a premiere in the history of the Competition. An exceptional opening concert will be held on September 6, highlighting the power this Competition has for launching international careers. Internationally acknowledged Romanian violinist Alexandru Tomescu, with his Stradivarius, and renowned Kazakhstani pianist Amir Tebenikhin, both laureates of the Enescu competition, in 1999, respectively 2007, will be performing on the stage of the Romanian Athenaeum in what will be the top classical musical event in September in Bucharest.

Over the years, Yehudi Menuhin and Arthur Rubinstein graced the Enescu Competition with their judgment. 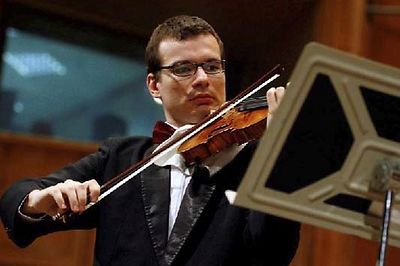