The Izmir Foundation for Culture Arts and Education (IKSEV) organises the 28th International Izmir Festival between 14 June and 3 September 2014. The 600th anniversary of diplomatic relationships between Turkey and Poland will be celebrated with the participation of the best artists from both countries in the Great Theatre of Ephesus. The opening concert was held on 14 June 2014 at 21.30 pm in the Great Theatre of Ephesus. After the opening ceremony, Krzysztof Penderecki who is one of the greatest artists, composers and conductors of our age, conducted the Sinfonia Varsovia, an established and internationally renowned art institute of Poland.

At this concert, Huseyin Sermet who is a renowned composer and pianist and has gained great reputation with his awards that he has won for over 30 years performed as a soloist with the Sinfonia Varsovia and showed his excellent technique, sensitive and flamboyant touches in front of the audiences.

The Overture to Prometheus and Piano Concerto No.5 of Beethoven and the Symphony No.2 (Christmas Symphony) of Penderecki were performed. Janusz Marynowski, the director of Sinfonia Varsovia Orchestra that participated in the Izmir Festival for the first time, stated that “each member of Sinfonia Varsovia Orchestra who comes to Turkey as part of the celebrations concerning the 600th anniversary of diplomatic relationships between Poland and Turkey has a great pleasure in performing at the first concert (opening concert).”

The concert was sponsored by the Employer Association of Cement Industry that celebrates its 50th founding anniversary with supporting one of the greatest art organisations in Izmir, and in cooperation with Culture.pl, a digital platform under the administration of the Ministry of Culture and National Heritage of Poland and the Adam Mickiewicz Institute.

The 28th International Izmir Festival is organised with contributions of the Ministry of Culture and Tourism, Izmir Metropolitan Municipality and the Izmir Development Agency, mainly sponsored by Eczacibasi Holding, also sponsored by the Employer Association of Cement Industry, and supported by the cooperation of the Adam Mickiewicz Institute, Poland’s Ministry of Culture and National Heritage, the Consulate General of Poland in Istanbul, the Honorary Consulate of Poland in Izmir, the Goethe Institute in Izmir, the Embassy of Greece, the Consulate General of Greece in Izmir, the Italian Consulate in Izmir, the Embassy of United States of America.

For the upcoming events of the 28th International Izmir Festival visit the festival's website. The nine events of the 2014 festival edition will take place at seven venues. This year for the first time, the St. John Baptist Church in Sirince will be the new gathering point of audiences apart from the other performance venues like the Great Theatre of Ephesus, the Celsus Library, Izmir Kültürpark Open-air Theatre, the Ahmed Adnan Saygun Art Center, the Ayios Haralambos Church in Cesme, the Performing Center of Izmir University of Economics.

Visit the EFA blog Festival Bytes to find out what Hasan Isikli from Izmir has to tell about the Izmir Festival. 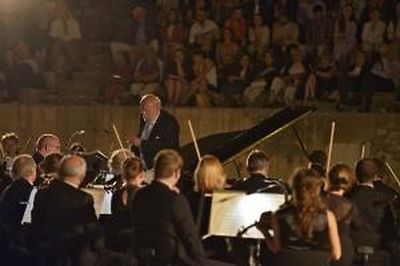