Kathrin Deventer addressed the full music hall with a touching speech about the importance of sharing artistic moments between artists and audience, something unique that happens only at festivals.

The audience applauded the lavish concert programme of Pantcho Vladigerov's Vardar Overture, followed by Tchaikovsky's Violin Concerto and Symphony No5 with standing ovation.

The Varna Summer International Music Festival is the oldest music festival in Bulgaria and one of the festivals with the longest tradition in Europe.

Rumyana Petrova, who developed the 2014 festival programme, said: “The 2014 edition has been developed following the ideas of the festival's original founders of 88 years ago: richness of different genres, balance between Bulgarian and world classical music, integrity between different generations of artists, featuring collaborations between Bulgarian and international artists, and spotlight on local composers and performers.”

Rumyana Petrova added: “We are celebrating the anniversaries of composers M. Mussorgsky, R. Strauss, P. Vladigerov, D. Hristov, and are premiering more than 10 new compositions. The seven weeks of Varna Summer 2014 promise to be a feast for local music lovers and tourists in Varna.” 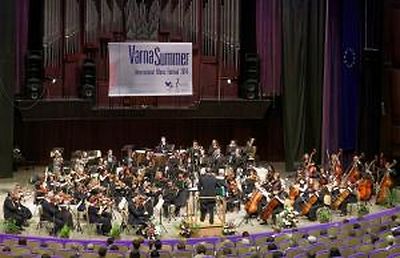