National Arts Festival Rises to the Occasion on its 40th Anniversary

The National Arts Festival in Grahamstown, which is celebrating its 40th Anniversary this year (3-13 July 2014), has announced a landmark Main programme which will feature the work of 65 former Standard Bank Young Artist Award winners; artists from 26 countries; over 550 performances in Theatre, Dance, Performance Art and Music; nine specially commissioned music works; musicians with more than 40 South African Music Awards and three Grammy Awards under their belt, and an ambitious, sprawling ‘Creation of a Nation’ project across Grahamstown.

“It is a bold programme which veers between the extravagant and the intimate as it attempts to reflect on major milestones – of the Festival, of the Young Artist Awards (which have been sponsored by Standard Bank for 30 years) and of South Africa, in our 20th year of democracy,” Artistic Director Ismail Mahomed said.

The event, which contributes an estimated R349.9m to the economy of the Eastern Cape each year, has become a touchstone for the state of South African art. “This year our artists have risen to the triple-anniversary challenge with some extraordinary proposals that we are excited to bring to life,” Mahomed continued.

Balancing the Main programme is the vast and exciting Fringe, supported primarily by the National Lottery Distribution Trust Fund. “The Fringe, also celebrating an anniversary as it is presented for the 35th time, continues to grow as South Africa’s biggest open access platform – hundreds of productions bring their talent to Grahamstown and fill theatres with their work across every conceivable genre,” Mahomed said.

“This year’s Fringe features the familiar and the tried-and-tested, as well as the cutting edge and unique,” Mahomed said.

Straddling the Fringe and the Main is the increasingly popular Arena programme, which showcases the work of previous Standard Bank Ovation Award winners as well as award-winning work from other Festivals around the world – this year including the Amsterdam, Prague and the Adelaide Fringe Festivals.

The Thinkfest programme has an international flavour too, being funded by the Netherlands Embassy together with media partner City Press. It will feature a recording of two panel discussions by the BBC World Service for broadcast globally to the service’s estimated 180 million listeners. Two awards initiatives launched in 2013 – the Short Sharp Stories Award for fiction writing, and the Arts Journalist of the Year Award, in partnership with BASA – return this year with the announcement of the winners of both these awards.

With the drive to develop new, sustainable audiences, the Festival has specially crafted a programme of Family Fare: The International Chicago’s Children’s choir, The Children’s Arts Festival, the Oatlands Family Venue, Peter and the Wolf – a children’s concert played by the KZN Philharmonic Orchestra, Splash and The Fingo Festival in Joza are all initiatives which, in whole or in part, aim to reach out to families and younger audiences. “We’re also featuring, on our Arena programme, one of the world’s best beatboxers – Tom Thum – in collaboration with musician Jamie MacDowell, which will appeal to the whole family,” Mahomed said.

Behind the scenes, the Festival continues to make improvements to the experience of its visitors; with the pending launch of a new website, mobile app, and a new ticketing system. “This troika of new technology will put the Festival at the leading edge of what happens globally at large scale, citywide events,” Festival CEO Tony Lankester said. “Our audiences will enjoy a seamless experience from planning their visit through to the time they leave Grahamstown. They will be able to virtually track our Hopper buses, for example, seeing exactly where the buses are on their phones so they can plan their journey around the City. The technology to achieve this wasn’t around and affordable five or even three years ago. Our international partnerships and friendships with other Festivals have enabled us to bring this ‘best of breed’ technology to Grahamstown.”

But the artistic programme remains the biggest enticement for South Africans to fulfill their ‘bucket list’ ambitions and make the journey to Grahamstown, particularly in this anniversary year. “We’re giving audiences the opportunity to think, reflect, celebrate, empathise, laugh and to look to the future through this year’s programme,” Mahomed said. “We’re proving that life begins at 40!”

Bookings for the 2014 National Arts Festival can be made online through the website www.nationalartsfestival.co.za. Programmes can be obtained through selected Exclusive Books and Standard Bank branches.

The National Arts Festival is sponsored by Standard Bank, The National Lottery Distribution Trust Fund, The Department of Arts and Culture, The Eastern Cape Government, City Press and M Net. 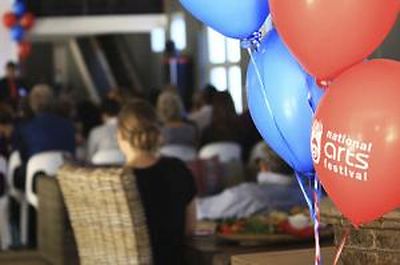