Beiteddine Art Festival as an act of faith

The Beiteddine Art Festival is one of the leading festivals in the Middle East. It takes place in a large and magnificent 200-year old Palace in the Chouf Mountains, in Lebanon. Throughout its history the festival has hosted some of the biggest names in the industry placing Lebanon on the cultural map of the Arab world. The 2014 edition takes place 26 June to 9 August.

“The Festival’s first edition was launched in the summer of 1985 during the war. It came as an act of faith and confirms the role of culture and the power of creativity in Lebanon. It was born amidst chaos and madness of war and continues to be a call for normality in difficult times,” says Nora Joumblatt, President of the Beiteddine Art Festival.

The 2014 season was inaugurated on 26 June with an exceptional concert by the Lebanese diva Magida El Roumi. More than 5000 spectators gathered in the magnificent courtyards of the palace.

The rest of the festival comprises rich and diversified performances with the participation of famous stars such as Joss Stone (2 July), British soul, A tribute to Sufi Masters by Waed Bou Hassoun and Kudsi Erguner (10 July) and their ensembles from Aleppo and Istanbul, blues and folk singer, Katie Melua (18 July), the Ballet National de Marseille in a contemporary dance performance “Titanic” (25/26 July), and a concert by the Arab crooner Kazem As Saher (1/2 August), the world leading Bel Canto tenor Juan Diego Flórez in a solo gala concert with the Budapest MAV Symphony Orchestra in a long awaited concert which will be the event of this summer.

The finale will be the play “Antigone” by world-renowned Lebanese playwright Wajdi Mouawad on 7/8/9 August.

The 2014 programme will undoubtedly satisfy a large public of unfailing supporters. 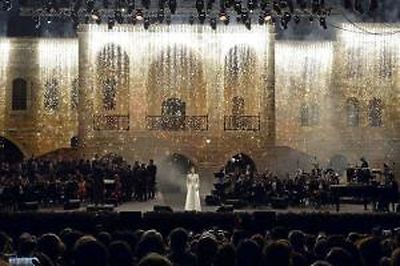