As part of the new Head of Delegation's cultural visibility strategy, in 2013 the EU Delegation to Uruguay made its first incursion into theatre. Since it is not easy to back 'European' theatre without favouring one Member State or another, the Delegation decided to launch a European theatre award. It was decided to name this award the 'Escena' (in Spanish both 'stage' and 'scene') and to bestow it annually to the best play of European authorship to be staged in Uruguay throughout the year. In its second edition, the Delegation is looking for a partner organisation in an EU member state to offer a theatre-related scholarship to the Award winner.

To maximise transparency and neutrality, the Delegation sought out the support of the Uruguayan Theatre Critics Association (Asociación de Críticos Teatrales de Uruguay, ACTU), responsible for deciding the Florencio awards (the Uruguayan version of the Tony awards) at the close of each year. The ACTU agreed to let the same jury nominated by them to decide the Forencio awards decide the EU's Escena award. This lends our new award the credibility of an organisation well-respected in the Uruguayan (and regional) theatre world and frees the Delegation of any possible accusations of bias.

The Escena award was launched in November 2013 at the gala at which ACTU announced the nominations to the 2013 Florencio awards. The event was held at EU Delegation premises and was well-attended by Uruguayan theatre actors, directors and script writers, as well as local authorities of the Ministry of Education and Culture and the media. The award was well-received by those present and relayed by the media to the rest of the country (see picture of the event here).

The Delegation is currently commissioning the production of a Tony-style statuette for the Escena award, which will be presented to the winner.

However, the Delegation would like to give the award more substance by adding some form of theatre-related scholarship for the director or for the actors of the winning play. The Delegation envisions a partnership with an organisation from within the EU’s performing arts / theatre network (preferably Spanish-speaking or English-speaking EU member state).

Organisations that are interested in offering such a scholarship to add to the Escena award are invited to contact the EU Delegation to Uruguay for more information. 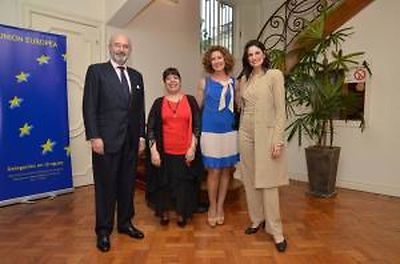