Yesterday, on 20 October 2014, the Atelier for Young Festival Managers POZNAN 2014 of The Festival Academy kicked off at the Zamek Culture Centre. The ceremony was opened by Marcin Kostaszuk, Vice-Director of Culture and Heritage Department of the city of Poznan, Karol Działoszyński, Chairman Malta Foundation Board and, Anna Hryniewiecka, Director Zamek Culture Center.

Professor Jerzy Limon, Director of the Gdansk Shakespearean Theatre, welcomed all participants with an inspiring speech about the Shakespeare Festival which just had its 18th edition and the newly set up Shakespeare Theatre in Gdansk. Following this, Kathrin Deventer, Secretary General of the European Festivals Association (EFA), introduced the Atelier as an initiative of EFA and now as part of The Festival Academy. Mark Ball, Artistic Director London International Festival of Theatre (LIFT), delivered a key-note speech setting the tone for 7 days of intense discussions and memorable exchanges which will shape the careers of the Atelier participants and all the people involved in the project.

The training programme initiated by the European Festivals Association (EFA) is hosted by Malta Festival Poznan and takes place from 20-27 October 2014 alongside the Nostalgia Festival Poznan. It brings together 41 young festival managers from 23 countries and 6 renowned festival directors from all over the world.

For the opening of the event, Marcin Kostaszuk, Vice-Director Culture of Culture and Heritage Department of the city of Poznan, invited the participants to not only pay attention to places but also to people, to the soul of Poznan, as a town full of history. Karol Działoszyński, Chairman Malta Foundation Board, welcomed the participants and expressed his delight to be able to host this first Atelier in Poland. Anna Hryniewiecka, Director Zamek Culture Center, welcomed all participants at ‘zamek’, the castle and venue for the 7 days and stressed the importance of being able to exchange experience and ideas.

After this Professor Jerzy Limon, Director of the Gdansk Shakespearean Theatre, talked about his theatre which started as an NGO and evolved to the successful institution it is today. He said: “the theatre started as a begging institution and I considered myself a professional beggar”.

Kathrin Deventer, EFA Secretary General, told the participants that the Atelier is about ‘them’. She said: ”It is about you making choices, you putting priorities to your work, you directing people into certain paths , it’s about your intentions and your responsibilities“. She invited all participants to be open and listen generously to each other in the next 7 days to be able to really understand each other coming from all different contexts and backgrounds. See the full speech here.

In an exciting keynote speech, Mark Ball, Artistic Director LIFT, encouraged participants to remember that they are the generation that holds the future of festivals in their hands which is a huge responsibility. Mark Ball underlined that festivals matter because they are an antidote against the fear of the other, they establish a dialogue, and build communities: “Festivals draw a map of the world, our city and ourselves”. He stressed the importance of (new ways of) audience development and the moral and social responsibility as festival managers towards the audience and the community. See the full speech here.

The Atelier POZNAN 2014 will close with a public session on Sunday 26 October 2014 at 18:00 at the Zamek Culture Centre, including a closing lecture by Paweł Potoroczyn, Director Adam Mickiewicz Institute and, Robyn Archer, Artistic Director The Light in Winter Melbourne and a concluding speech by the host, Michal Merczynski, General Director of the Malta Festival Poznan and the Nostalgia Festival Poznan.

If you would like to attend, please RSVP with Małgorzata Mikołajczak: malgorzata@malta-festival.pl

The European Festivals Association (EFA) is the umbrella organisation for festivals across Europe and beyond representing 102 festivals, national festival associations and cultural networks from 41 countries. EFA initiated the Atelier for Young Festival Managers in 2006; since 2013 it has been organised by The Festival Academy. The Atelier POZNAN 2014 is co-organised with the Malta Festival Poznan and supported by Adam Mickiewicz Institute, Marshall Office of the Wielkopolska Region in Poznan, Department of Culture and Heritage Poznań City Hall, Polish Institute Cultural Service of the Embassy of the Republic in Poland in Brussels, Culture Centre ZAMEK, Art Station Foundation by Grażyna Kulczyk, Stary Browar, Concordia Design, School of Form, ABC Gallery, Foundation for European Art, Enter Music Festival, Hotel Boutique Garden, Hotel NH Poznań, Pol-Car and Goethe Institut – Poland. Arts Council Korea, Africalia Belgium and Pro Helvetia, Schweizer Kulturstiftung are supporting participants from Africa, South-Korea and Switzerland to take part in the Atelier POZNAN 2014. The Festival Academy and the European Festivals Association thank for their support: the European Commission, the Flemish Authorities and the City of Gent. 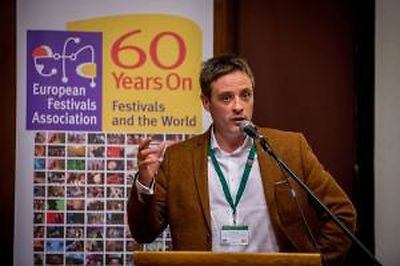