[PRESS RELEASE - Brussels, Belgium, 28 October 2014] The Festival Academy’s latest edition of the Atelier for Young Festival Managers, the training programme initiated by the European Festivals Association (EFA), concluded in Poznan, Poland on 26 October 2014. Hosted by the Malta Festival Poznan, it brought together 41 young festival managers from 23 countries. They joined the ever growing network of today 264 Alumni from 60 countries. The 7 days were full of thought-provoking exchanges and established sustainable ties for the future. The next opportunity for young festival leaders worldwide to participate in the Atelier is in Beirut in March 2015.

Jeffrey Tan, Atelier participant from Singapore, said: “This is indeed a rare and unique opportunity to meet and learn from the very experienced mentors and equally rich fellow festival managers and directors. Taking time to stop and reflect, listen and learn, rediscover why I am doing what I am doing and how I am running my festival.”

During the Atelier’s closing session on 26 October, the renowned artistic director Robyn Archer said: “Indeed , this might well be a description of the Atelier where we gather in numbers, truly international, have a surfeit of ideas within a compressed timeframe, and emerge tired but re-energised, some of our positions altered, perhaps just as confused, but certainly not defeated – leaving with a feeling that we are not alone, and almost certainly with hope and some new approaches and strategies.”

Introduced by Michal Merczynski, General Director Malta Festival Poznan, Agata Grenda, Director of the Cultural Marshall's Office of the Wielkopolska, underlined that ideas are open knowledge and should not be claimed by anyone.

Paweł Potoroczyn, Director Adam Mickiewicz Institute, presented his institute. He described it in one sentence as “a business in relationships” where people are most important

Kathrin Deventer, EFA Secretary General, said: “EFA’s future is present as long as the network of festivals invests into training and the next generation of festival makers. The Atelier Alumni network is an incredible enrichment of the Association’s network.” She thanked everybody involved in making the Atelier POZNAN 2014 a success: first of all, the host, the Malta Festival Poznan, the Polish Institute Brussels, Culture Centre ZAMEK, Adam Mickiewicz Institute, Hotel Boutique Garden, Hotel NH Poznań and Goethe Institute Poland. She also thanked Arts Council Korea, Africalia Belgium and Pro Helvetia Switzerland and all the cultural venues in Poznan for their contribution.

POZNAN 2014 confirmed the standard of excellence set in the previous editions, paving the way for the next Atelier in 2015 which will take place from 21 to 27 March 2015 in Beirut, Lebanon, in collaboration with the Beiteddine Art Festival. Applications for the Atelier BEIRUT 2015 must be submitted by 31 October 2014.

Hugo De Greef, General Coordinator of the Atelier hhighlighted once more the characteristics of the Atelier, the art and the artist, the 7 days, the 41 participants coming from 23 countries, the mentors and the city of Poznan which set the framework and allows for an intensive sharing of knowledge.

The latest news, blogs, and more information can be found at The Festival Academy, Facebook, EFA on Twitter and the Festival Bytes. 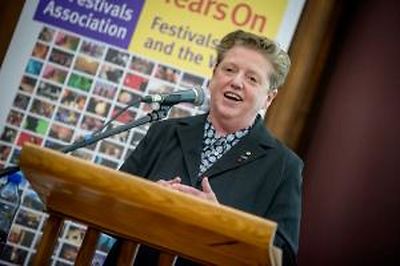