In addition, the main programme features a broad visual arts component featuring two new commissions by Fatma Lootah and Noor Al Suwaidi and, for the first time in the Middle East, the acclaimed FotoFest exhibition View From Inside. The United Nations High Commissioner for Refugees (UNHCR) will be the charity beneficiary of the 2015 Festival.

Combining music, theatre, dance, visual and traditional arts, the Abu Dhabi Festival commences on 3 March with a nationwide education and community programme. The main programme of performances takes place at Emirates Palace from 3 March to 2April, and includes the Festival Recital Series as well as the FotoFest exhibition View From Inside which continues until 20 April. The Festival’s range of performances, exhibitions, discussions, workshops and screenings will give audiences the chance to witness first-hand the power of the arts to unlock the potential of individuals as well as to nurture greater mutual cultural understanding between local and global communities.

Supporting the main programme, the Festival’s extensive education and community programme embraces the communities of all 7 Emirates, upholding the spirit of ‘Bilad Al Khayr’ (The Land of Blessings). Offering over 130 inspiring and memorable experiences, Abu Dhabi Festival is one of the largest cultural festivals in the region.

H.E. Hoda Al Khamis-Kanoo, ADMAF Founder and Artistic Director of the Abu Dhabi Festival, said: “As each year passes, the Abu Dhabi Festival embeds itself in the very fabric of society. It is not simply an event. It is a creative experience that is anticipated and embraced by the people of the UAE. The myriad platforms upon which we invite the nation’s most creative minds and the world’s greatest artists to perform, exhibit and exchange are unrivalled incubators of great ideas; sowing the seeds of invention across our beloved nation and beyond, so that tomorrow we may reap the benefits.

"In a world that has never been as complex and diverse as it is today, the ability of the Arab World in general and Abu Dhabi in particular to generate new ideas, to be the place of invention, is one of paramount importance. The Liberal Arts including the humanities and sciences together can best equip us to shape our future world; to seize the opportunities and overcome the challenges we face.

"From an economic standpoint, it is our duty to empower, encourage and invest in our youth so that they may generate new ideas and develop them. The UAE is an extraordinary ecosystem to nurture new ideas, new seeds for invention.

"From the Abu Dhabi Festival to its grants scheme, community programmes and year-round education work, ADMAF sees its role as that of literally cultivating the desert – of creating the perfect conditions for every citizen in the UAE to nurture their ideas until they take root and blossom. After all, the only limitless resource on this planet is creativity.”

Enhancing its long-standing commitment to youth music, this year the Abu Dhabi Festival will introduce a brand new series of recitals by award-winning young laureates of classical music. These intimate concerts offer a unique opportunity to experience tomorrow’s global virtuosos. During their visit to the UAE capital, these outstanding musicians, pianists Ah Reum Ahn on 3 March and Julian Libeer on 13 March and violinist Aisha Syed Castro on 17 March, will also engage and inspire Abu Dhabi¹s talented young musicians through workshops in schools, universities and music centres.

Making his debut in the Arab Gulf region with a performance at the Emirates Palace Auditorium on 20 March will be Brazilian music legend, Sérgio Mendes: Beats from Brazil. In a concert featuring his greatest hits, Sérgio Mendes (accompanied by rapper H2O) will showcase his array of musical influences as he charms the audience with his eclectic mix of soul, funk, jazz and pop, bringing a carnival of Brazilian rhythms to Abu Dhabi.

Dazzling Peruvian tenor Juan Diego Flórez will perform A Night at the Opera with the Grammy-nominated Budapest Festival Orchestra, conducted by Gábor Takács-Nagy, with highlights of opera ranging from Rossini to Bizet. This Arabian Gulf Premiere takes place in the Emirates Palace Auditorium on 23 March.

As this year's incumbent orchestra, the Budapest Festival Orchestra conducted by its founder Iván Fischer, will perform on three additional nights: on 26 March with the award-winning Norwegian pianist Leif Ove Andsnes playing Beethoven's Piano Concerto No 5, and on 28 and 30 March for two special staged concert performances of Mozart's The Magic Flute.

In the intimacy of the Emirates Palace Ballroom, the Deutsche Grammophon artist Jan Lisiecki will treat the Festival audience to an exquisite evening of classical piano, featuring one of the Chopin Études for which he is especially renowned. The multi award-winning piano prodigy makes his Arabian Gulf Premiere on 24 March.

Continuing the Festival’s reputation as a showcase for classical music and a proud supporter of youth participation in music, world-renowned maestro Riccardo Muti will conduct the Luigi Cherubini Youth Orchestra on 25 March. The Orchestra comprises talented young instrumentalists from all over Italy – the Abu Dhabi Festival 2015 Country of Honour. The concert will feature peerless German violin virtuoso Anne-Sophie Mutter performing the Beethoven Violin Concerto, one of her signature pieces.

The final concert stars the versatile Lebanese American singer Mayssa Karaa, whose unique style forms an exciting musical bridge between East and West. Mayssa will make her Festival debut on 2 April with an all-star line-up of musicians, with a special guest from the UK, singer-songwriter Marcus Nand.

For the full programme visit www.abudhabifestival.ae 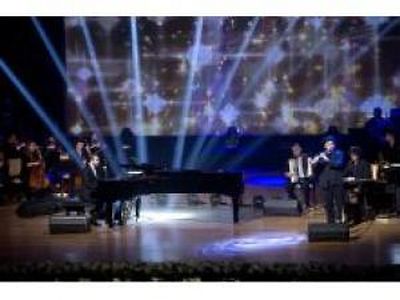