The Usedom Music Festival has been presenting the music cultures around the Baltic Sea at the German-Polish Isle of Usedom for 22 years. Every year, it changes its focus on one single country with exclusive programmes. Internationally renowned artists such as Kurt Masur, Esa-Pekka Salonen, Krzysztof Penderecki, Mstislav Rostropovich, Gidon Kremer or the conductor dynasty Kristjan, Paavo and Neeme Järvi and many more brought the sound of the Baltic Sea to the Isle of Usedom. From September 19th to October 10th Finnish music makes the island ring at the southern coast of the Baltic Sea.

“The 22th Usedom Music Festival wants above all one thing: Thrill to Finnish music and internationally renowned Finnish and German musicians and ensembles”, says Thomas Hummel, executive director of the Usedom Music Festival. “It’s the only festival exclusively dedicated to the music of the countries bordering the Baltic Sea. We offer about 40 concert events at breathtaking and atmospheric places on the whole Isle of Usedom – a famous touristic destination. For example the old Power Station at the historical military testing site of Peenemünde or the concerts at the three imperial sea side resorts – a cultural triad of architecture, music and one of the longest sand beaches in Europe.” In the past season about 14.000 visitors came to the Usedom Music Festival.

Towards Nature: Opening with a Finnish World Premiere

As a turn towards nature, the musical journey to Finland will begin with the world premiere of GREEN, a concerto for piano and orchestra by the Finnish composer and jazz musician Severi Pyysalo. The festival orchestra Baltic Sea Youth Philharmonic, initiated by Nord Stream AG and Usedom Music Festival, and its Founding Conductor and Artistic Director, Kristjan Järvi, will premiere this work together with the Finnish pianist Pauli Kari. The ensemble is familiar with classical music as well as Jazz, Folk or World Music and is a multinational ensemble that brings together the most talented music students aged 18 to 30 years from all countries around the Baltic Sea. In October 2015, the young musicians will receive the European Cultural Award of the European Foundation of Culture Pro Europe for their contribution to the international cooperation in the Baltic Sea region through exceptional musical achievements. In the power station Peenemünde, they will also musically navigate with “A Fantasy Journey to the Faroers” by Carl Nielsen. The concert will culminate with the third symphony by Jean Sibelius – in bright shining C major!The Finnish as well as the Danish master composer were born 150 years ago in 1865 – a year of great promises for the music around the Baltic Sea.

Finland in the context of Baltic Sea Music

“This year, we will value Sibelius’ work and put it into the context of the entire Baltic Sea region. Furthermore, we will do concerts with all three birthday kids: Sibelius, Nielsen and a close friend of Jean Sibelius, the Russian composer Alexander Glazunov”, says Dr. Jan Brachmann, the programme producer of the festival. Although Finland’s music from the time before and after Sibelius won’t be neglected, Sibelius’ music will be in the centre of the festival’s programme. “My music has nothing, absolutely nothing of the circus; what I have to offer is clear, cold water”, the great Finnish composer Jean Sibelius once wrote in a letter. For the 22th Usedom Music Festival, it is a matter of heart to overcome boundaries between nations by presenting this musical heritage to its audience.

The diversity of Finnish music

From chamber music to great symphonies, from spiritual songs to tango, the Usedom Music Festival showcases the diversity of Finnish music. The vocal ensemble Lumen Valo, the pianist Henri Sigfridsson, the folk band FRIGG but also German ensembles and soloists show their enthusiasm for Finnish music. In addition to Peenemünde and the imperial spa concerts, the Usedom Music Festival also offers a programme for children and adolescents and presents the competition “Young Best in the North”, the 2nd Achterkerke Music Prize and the winners of the Young Concert Artists’ competition New York – an opportunity to experience some of the most promising young stars of tomorrow. 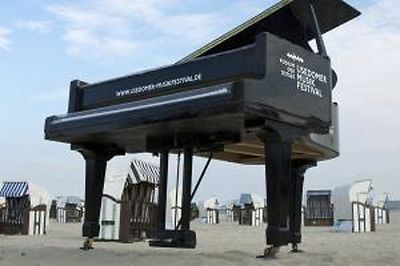