The eighth International Winter Arts Festival in Sochi in 2015, the first “post-Olympic” festival, is in no way inferior to its predecessors in terms of programme scale and diversity. The ten days of the festival (13-22 February 2015) include ten events at the Winter Theater and seven concerts at the Philharmonic Organ Hall, along with master-class workshops focusing on academic, jazz, and folk instruments, academic vocal music, and classical ballet.

The Great Romantics: Brahms, Schumann, and Their Circle – a joint concert with the Brahms Institute in Lübeck and the Joseph Joachim International Violin Competition Hannover – is dedicated to rarely-performed masterpieces by the German Romantic musicians; it will feature talented members of the new generation of musical arts from Russia and Germany.

Maestro Yuri Bashmet will present a solo Viola Benefit devoted to the music of Russian composers from the second half of the 20th Century.

This year, the festival’s evening of ballet is entirely dedicated to a genius dancer from the early 20th Century: Wacław Niżyński, “the God of Dance.” European ballet stars will perform ballet fragments and choreographic miniatures in which Niżyński shone; acclaimed choreographer Edward Clug will present his version of Stravinsky’s The Rite of Spring.

The programme includes ensembles established by the festival’s artistic director, Yuri Bashmet, and acclaimed worldwide thanks to him: Novaya Rossiya State Symphony Orchestra and the Grammy-winning Moscow Soloists Chamber Orchestra.

The festival’s traditional evening of jazz will offer Russian audiences their first opportunity to hear Africa’s leading jazzman: pianist and composer Abdullah Ibrahim, who wrote the Chocolat soundtrack (his talent was discovered half a century ago by the legendary Duke Ellington).

The festival’s opening included a performance by Canadian trumpet soloist Jens Lindemann, who is equally at home in classical and jazz music. Leading alternative rock musician Diana Arbenina and her Night Snipers band will perform in a joint concert with Yuri Bashmet and Novaya Rossiya State Symphony Orchestra.

The Chekhov Moscow Art Theater is coming to Sochi with its version of The Double Bass (a play by Patrick Süskind), starring prominent actor Konstantin Khabensky.

In addition, the festival programme includes a Young Composers Contest to mark Sviatoslav Richter’s centenary and the 80th anniversary of Alfred Schnittke’s birth; several educational projects; exhibitions co-organised with some leading Russian museums – the Bakhrushin Theater Museum (an exhibition dedicated to Wacław Niżyński) and the Glinka National Museum Consortium of Musical Culture (an exhibition marking Tchaikovsky’s 175th anniversary and an exhibition about Soviet composers from the second half of the 20th Century); the festival will also include a Russian Festivals Exhibition-Conference (jointly with the European Festivals Association and the Russian Union of Concert Organisations) and the 6th International Echo-Eco Exhibition-Contest. Film club sessions will be co-hosted by the State Central Cinema Museum.

“Festivals: Practice, Specifics, Creativity” is an international conference and exhibition to be held in Sochi on 20-22 February, as part of the VIII Winter International Arts Festival. Conference discussion will focus on current issues related to organising and running festivals in Russia and abroad: the role of festivals in the world today, festivals as a means of long-term cultural development, the potential of festivals to promote a region’s economic development, festival programme design, and much more.

To find out more about the International Winter Arts Festival in Sochi visit www.wiafs.ru. 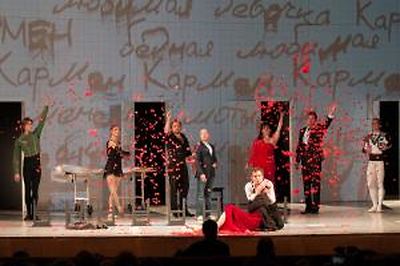