HONORIFICABILITUDINITAS, the Latin word chosen as the motto of the 28th Music Biennale Zagreb (MBZ) translates into: the state of being able to achieve and receive honour. The honour will be achieved and received by all the participants, composers, musicians, artists, audience and music alike. Over just eight days (18-25 April 2015), the 28th MBZ offers 40 concerts, performances and installations of all shapes and sizes in ten formal performance venues, but we will also flood the streets of Zagreb with street performances with around 700 performers in total. Three symphony orchestras and 11 chamber ensembles are participating. MBZ is preparing four contemporary dance shows and a world premiere of a long lost, but recently discovered opera by the great Croatian composer Boris Papandopulo. Out of some 150 compositions on the programme, 20 of them were commissioned especially for this occasion and will be premiered at the festival.

Special honours go to five featured artists in focus of the 28th MBZ, which have already been honoured, medalled and awarded worldwide. They are: Kaija Saariaho, Michel van der Aa, George Benjamin, Thomas Adès and Bruno Mantovani. Their compositions will ring through many concert programmes of different ensembles, from solo recitals to chamber and orchestra concerts during the festival, but mostly on Thursday, 23 April.

From the rich and versatile programme, here are three highlights selected by the festival:

First performance of the opera Madame Buffault by Boris Papandopulo will gather a large student ensemble in a new joint project of Zagreb art academies and Faculty of Textile Technology run by professionals. We find the project very significant because it will be performed at the Croatian National Theatre in Zagreb, which is a valuable experience for all students as well as for the audience.

5-Minute Opera Competition has already echoed around the world, proof of which are almost a hundred submitted applications. In the beginning of December, our jury decided which ten compositions will be performed in the competition finals, held during the MBZ. The winning composer will receive a commission for a new opera, which will be premiered at the MBZ 2017.

Soap Opera, original and unique, is a co-production between MBZ, Cantus Ensemble and Culture of Change of the Student Centre of the University of Zagreb. During their concert season, at each concert of the cycle in Lisinski, Cantus Ensemble will perform one episode of the Soap Opera commissioned from five Croatian composers: Mladen Tarbuk, Mirela Ivičević, Zoran Juranić, Silvio Foretić and Gordan Tudor. The first performance of the entire piece, with Mladen Tarbuk's overture, will be performed on the stage of &TD Theatre during the festival in April.

MBZ – from dusk till dawn

Since its first edition in 1961, Music Biennale Zagreb has been a place to discover and meet music worlds. Due to the rich programme, the 28th MBZ is once again on the same path. The audience will be able to enjoy chamber music, symphony concerts and theatre projects, operas and ballets as well as jazz, electronic music and multimedia experiments. The programme of the 28th MBZ is divided into clear sections and cycles with different themes starting from morning hours through noon and afternoon to prime-time and late night events.

The full programme can be found on the Music Biennale Zagreb’s website. 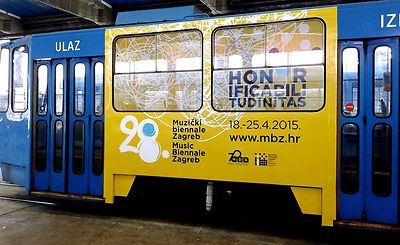