Satire and freedom of expression will seize centre stage at this year’s National Arts Festival, which runs from Thursday 2 July to Sunday 12 July in Grahamstown in the Eastern Cape. Responding to social and political debates currently raging in South Africa, the Festival organisers have chosen to highlight the genre of satire in place of the usual “featured artist” category. “In taking a strong advocacy and agitating angle, this year’s programme not only honours South Africa’s constitutional right to free speech, but also creates opportunities for South Africans to do what they do best – engage passionately and honestly about life in our country,” explains Ismail Mahomed, the Festival’s Artistic Director.

“The arts need to challenge and provoke,” he says. “South Africa’s satirists, cartoonists, commentators and court jesters need, now more than ever, to be given the opportunity to be the public voice, the conscience, of the nation.”

South Africa’s most acclaimed satirists – Pieter-Dirk Uys, Chester Missing, Loyiso Gola and Iain EWOK Robinson, as well as works such as Tara Notcutt’s Three Blind Mice – will keep South Africans on their toes, challenging audiences while helping us to laugh at ourselves.

Now in its 41st year, the Festival’s Main programme pays homage to some of the country’s most important living and past legends. “This year’s programme aims to take us forward into new, exciting spaces while acknowledging the depth of our roots and our heritage,” Mahomed says.

International collaboration is another undisputed priority, Mahomed says. This year’s programme demonstrates a deepening of relationships with countries north of our border, with Botswana (pop band Chasing Jaykb performing on the Fringe) and Zimbabwe (the extraordinary Tumbuka’s dance piece Portrait of Myself as my Father) represented.

On the programme are works and artists from around the globe, including Leslie Lewis in Miracle in Rwanda, the incredible story of Rwanda genocide survivor Immaculée Ilibagiza; Irish comic and writer Dylan Moran, best known for his sardonic observational comedy (and the BAFTA Award-winning UK television series Black Books); and Dutch electric jazz outfit PAND7090.

The contemporary music line-up sizzles with swag, with Ray Phiri in town for a one-night-only solo concert. Beatenburg, Shortstraw, Thandiswa Mazwai and MiCasa all feature on the Main programme this year.

Tony Lankester, the Festival’s Chief Executive, says: “Behind the scenes we’re working harder than ever to deliver an event that is slicker and more tech savvy. We’re focused on creating an amazing, hassle-free experience for our festivalgoers. Our other priority is to deepen our relationship with our host city and we are focused on being a more visible and relevant part of everyday, year-round life in Grahamstown.”

Read the full news with more programme details on the festival’s website at www.nationalartsfestival.co.za. 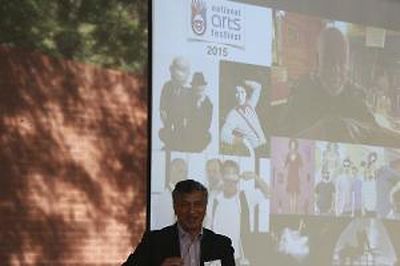