The Yerevan Perspectives International Music Festival launched its Festival Academy in Byurakan on 3 April 2015. World famous pianist Evgeny Kissin, whose recital opened the 16th edition of the festival at the State Academic Theatre of Opera and Ballet one day earlier, became the first musician who played on the new Shigeru Kawai Grand piano of the Academy, which was purchased thanks to a generous donation from Evgeny Kissin and "Pyunik" Foundation.

President of Armenia Serzh Sargsyan and first Lady Rita Sargsyan, among other honorary guests and key figures from the arts and culture sector, attended the opening ceremony, which was followed by an exciting concert of talented children.

From 11 to 14 April, the Festival Readings of The Festival Academy, an initiative of the European Festivals Association (EFA), will be hosted by the Yerevan Perspectives Music Festival at the Festival Academy Byurakan. This three-day education format will give the participants at once professional and practical insights from high-level lecturers from the festival sector. Speakers include: Hugo De Greef (Atelier Coordinator, former EFA Secretary General, Director European Capital of Culture Bruges 2002, Co-Founder Kaaitheater Brussels – Belgium); Nele Hertling (Vice President of the Academy of Arts Berlin, Member Strategy Group “A Soul for Europe” – Germany); Peter Inkei (Director of the Budapest Observatory – Hungary); and Paul Scheffer (Publicist and Professor European Studies at the University of Amsterdam and Tilburg – Netherlands). 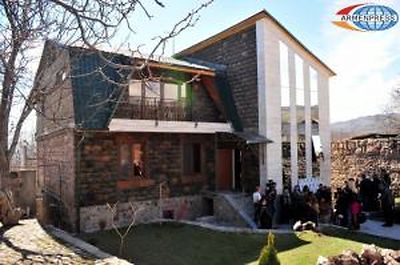