The international literature festival berlin (ilb) and the Lepsiushaus Potsdam are calling for a worldwide reading on 21 April 2015 - the day that marks 100 years since the beginning of the Armenian Genocide. Several hundred Armenian intellectuals – poets, musicians, parliamentary representatives and members of the clergy – were arrested in Constantinople (today Istanbul) on 24 April 1915, and deported to the Turkish interior where most of them were murdered. It was the start of a crime against humanity. The extermination of the Armenians during World War One was the first systematically planned and executed genocide of modern times. More than a million Armenians in the Ottoman Empire died during this genocidal campaign.

The events took place before the eyes of the whole world and were clearly documented by German, Austro-Hungarian, Italian, American, Scandinavian, Armenian and Ottoman sources as well as by a great number of historical research projects. As early as August 1915, The New York Times reported on a methodically planned programme of ethnic cleansing and extermination which was unprecedented in history up to that time. The German Reich’s government, which was allied to the Ottoman Empire, reached the same conclusions without undertaking anything against what was happening.

The Turkish political world denies the Armenian Genocide up to the present day, although the facts have been known for more than a hundred years. The Indian writer Arundhati Roy has spoken publicly about this scandal on many occasions, including at the 2009 International Literature Festival Berlin.

A great number of Armenian voices were silenced in 1915 and in the years thereafter. Since then, others have become loud and have spoken out against forgetting, among them an increasing number of voices from the democratic Turkish civil society. In remembrance of the victims and in association with the demand for international recognition of the genocide, we are calling for a worldwide reading on 21 April 2015, with literary texts from Armenian authors, among them Siamanto, Komitas, Yeghishe Charents, William Saroyan, Hovhannes Shiraz, Paruyr Sevak, Hakop Mntsuri, Silva Kaputikian and Hrant Dink.

Have a look at the list of signatories, texts, and events! 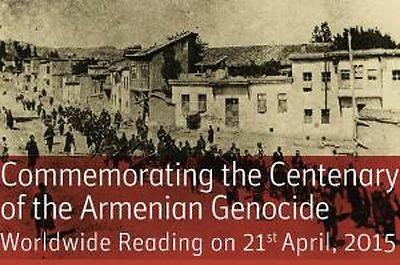