The 14th Mersin International Music Festival runs from 30 April to 24 May. The event will host many artists and orchestras from Turkey and the world. The opening concert will be given by the Mersin Festival Orchestra, which was formed this year. The orchestra will perform Fazıl Say’s “Istanbul Symphony” under the baton of conductor İbrahim Yazıcı.

On 2 May, Viennese Die Wiener Strauss Company will take the stage with works by Mozart and Strauss. The band Paganini will be on the stage on 3 May.

The festival will continue with Le Div4s, which features four Italian sopranos and will take the stage with the Mersin Festival Orchestra on 10 May.

Famous Turkish tenor Hakan Aysev, who performs well-known operas with his own interpretation, will be the guest of the festival on 9 and 10 May, accompanied by the Mersin Metropolitan Municipality City Orchestra.

St. Paul Museum will host a concert on 12 May, featuring local music from the world by renowned virtuosos.

Famous harpist Bahar Göksu and her band will sing Refik Fersan and Faize Ergin songs. Also, ballet lovers will be able to see ballet stars from Tokyo, Moscow, Holland and Portugal on 14 May.

Within the scope of the festival, unforgettable songs by the late singer Zeki Müren have been rearranged for an orchestra of western instruments and Turkish music reeds. These songs will be performed on 19 May. Turkish Bülent Bezdüz and Czech Adriana Kucerova will take the stage on 22 May with the Mersin State Opera and Ballet Orchestra.

The festival will close with a concert by the Presidential Symphony Orchestra on 24 May.

The festival has been a member of the European Festivals Association since 2007. Selma Yağcı, Chair of the Board of Directors of the Mersin International Music Festival, said: "We may not yet be part of the European Union, but we are already part of EFA. This is a tremendous achievement for us. There are 40 countries represented in EFA so we have to improve our festival every year to stand out among them. We are doing this not just for the sake of our city, but for Turkey." 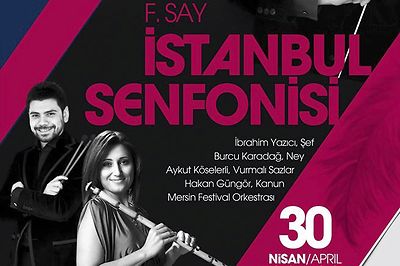