On Friday, 17 July, the Mosel Musikfestival opened its 30th edition,  kicking off 3 months of festivities and special artistic encounters along the Mosel river. In the Basilica of Trier, Ludwig van Beethoven’s Missa Solemnis came to life and showed its full brilliance. But, also in front of the Basilica on the Basilica Square, hundreds of people enjoyed the live-stream of the concert: a very special atmosphere on a late-night summer evening bringing the festival’s voice far beyond the concert hall walls.

The Festival is one of the most successful events in the region. Until 3 October the diverse and impressive programme includes musical “legends” that have been important in the history of the festival as well as new talents who are supported by the festival in kicking off their careers.

With greetings from ministers, mayors, ambassadors, Members of the European Parliament and the European Festivals Association, the local as well as European significance of the Mosel Musikfestival and its director Hermann Lewen was celebrated.

The European Festivals Association was represented by its Secretary General Kathrin Deventer. She congratulated the festival: “The European Festivals Association (EFA) is delighted to have the Mosel Musikfestival amongst its members and to be able to celebrate the jubilee together. On behalf of 100 members from 40 countries, I wish Hermann Lewen, the festival team and all participating artists and audiences a successful 30th edition with many thrilling moments in the next weeks.” 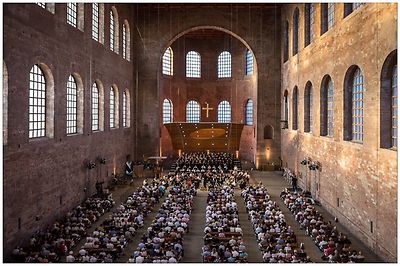