[Seaside Resort Ahlbeck / 18 August] Concerts in Heiden, Hanover and in Peenemünde, Island of Usedom • International newcomer soloists: Heigo Rosin, Hyeyoon Park and Pauli Kari • World premiere of ‘Green’ Piano Concerto by Finn Severi Pyysalo at the 22nd Usedom Music Festival • European Cultural Award 2015 for BYP on 2 October in Dresden • In the 25th anniversary year of the reunification of Germany, Baltic Sea Youth Philharmonic (BYP) undertakes a tour of the country, from west to east. The multinational orchestra of talented music students from all the countries around the Baltic Sea will bring their shared values of community, innovation and passion concern to Germany’s concert halls. Under the baton of Estonian Kristjan Järvi, BYP presents the world premiere of the ‘Green’ Piano Concerto by Finnish composer Severi Pyysalo. It also performs with three rising young soloists: Heigo Rosin, Hyeyoon Park and Pauli Kari. The orchestra’s year comes to an exciting climax on 2 October as it collects the prestigious European Cultural Award and performs at a star-studded event at Dresden’s Frauenkirche, the Church of our Lady.

Historic moments The musical journey across Germany kicks off on 10 September in Heiden and takes the orchestra back to its birthplace at the Usedom Music Festival, where it will perform at the opening concert (19 September), as well as making exciting new ground with its debut in the NDR Sendesaal in Hanover (17 September). On 2 October, Baltic Sea Youth Philharmonic will be given the European Cultural Award by European Culture Foundation ‘Pro Europe’, in recognition of its exceptional achievements in developing creativity and innovation, and influencing the young classical music scene across the Baltic Sea region. BYP and Kristjan Järvi will perform together with world-renowned soloists in the live televised ceremony – with tenor Jonas Kaufmann, soprano Angela Gheorghiu, cellist Maximilian Hornung and organ player Samuel Kummer.

World premieres The repertoire for each concert has been carefully chosen by Founding Conductor and Music Director Kristjan Järvi to celebrate composers and works from across the entire Baltic Sea region, from Estonia’s Erkki-Sven Tüür to Denmark’s Carl Nielsen. The programme also includes a world premiere by Finnish vibraphonist Severi Pyysalo. Pyysalo’s ‘Green’ Piano Concerto has at its heart the theme of protecting the environment. Kristjan Järvi explains its importance: ‘For me, Severi Pyysalo’s “Green” Concerto is a powerful evocation of nature across the whole spectrum, from the humility and purity of new life, to its sheer, raw power. I hope that with this new piece, we can go some way to reconnecting with nature, our true selves and our place on this planet.’ He explains the importance of commissioning new works from the region: ‘In giving a platform to these composers, our love and respect for the Baltic Sea region continues, through our mission to support new music emerging from the scene.’

Rising young soloists As well as offering talented young players from the Baltic region the opportunity to train to professional standards within the orchestra, BYP also gives performance possibilities to some of today’s rising stars. Percussionist Heigo Rosin (26) is a BYP musician and the first percussion soloist to emerge from Estonia, winning awards and performing with many major ensembles, and he is launching his own Estonian Percussion Music Project to bring world attention to the composers and percussion music of his home country. He performs Sven Tüür’s Ardor for marimba and orchestra (10 September). Violinist Hyeyoon Park (22), from South Korea, has been recognised by numerous international awards and prizes, including the London Music Masters Award 2012–15, the Borletti–Buitoni Trust Award 2011 and Orpheum Foundation sponsorship. She will perform Saint-Saën’s Violin Concerto No. 3 throughout the tour (10, 17 September). Finnish pianist Pauli Kari (38) has received widespread acclaim for his thrilling performances in some of the world’s great venues, from New York’s Carnegie Hall to Leipzig’s Gewandhaus. He will perform the world premiere of Severi Pyysalo’s ‘Green’ Concerto with the orchestra (19 September).

Unique voice from the North Founded in 2008 by the Usedom Music Festival and Nord Stream AG, the Baltic Sea Youth Philharmonic features musicians aged 18–28 from, or studying in, the ten countries bordering the Baltic Sea. Retaining national specialities but opening up to international perspective, the musicians share their influence, knowledge and perspective to create a unique voice for the region. More than a youth orchestra, it is a project for cultural and social integration and cooperation to create unity in a historically divided region. In 2015, BYP is supported by its co-initiator and main sponsor, Nord Stream AG, operator of the natural gas pipeline through the Baltic Sea, as well as Saipem, one of the global leaders in the engineering & construction and drilling businesses, as sponsor. 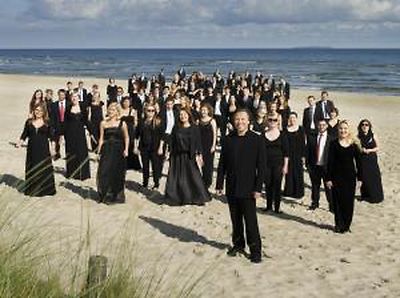