[PRESS RELEASE, Bucharest, Romania, 2 September 2015] Maestro Zubin Mehta announced in a press statement that he has accepted the invitation to be the Honorary President of the George Enescu International Festival for the 2017 edition. The invitation was made by the organisers based on a mutually agreed decision made at inter-institutional level. Maestro Zubin Mehta said: “I look forward to returning to Romania; you have the most beautiful Festival in the world and the most wonderful audience. Each musician feels so good here when they look towards the audience and sees the people’s smiles. The Romanian musicians are quality musicians and we have to thank the Festival organisers. I have accepted this proposal because it is an offer I could not refuse.”

During the negotiations, Maestro Zubin Mehta analysed the artistic programme in progress for the 2017 edition, in cooperation with the future artistic director of the Festival and approved it.

Since 1981, Maestro Zubin Mehta has been the music director for life of the Israel Philharmonic Orchestra, being the first director who brought together on the same stage the biggest three tenors of the world: Luciano Pavarotti, Placido Domingo and Jose Carreras, in a concert that is still one of the bestselling concerts of all times.

Zubin Mehta has been with the George Enescu International Festival since its 1964 edition. In 1995, for his first participation in a post-December edition of the Enescu Festival, Zubin Mehta conducted on the Alexandru Ioan Cuza Hall Stage at Casa Poporului. He has returned more than once for the Enescu Festival, saying that he is in love with the Festival and the Romanian audience.

During the previous editions of the George Enescu International Festival there has been a tradition of appointing an Honorary President and an Artistic Director: Lord Yehudi Menuhin and the conductor Lawrence Foster (1998), Roman Vlad and the conductor Cristian Mandeal (2001), Mr. Ioan Holender and Cristian Mandeal in 2003. Between 2005 and 2015 both functions have been accepted by Mr. Ioan Holender.

Details on the Festival for the media:
Ana-Maria Onisei, anamaria.onisei@omavision.ro 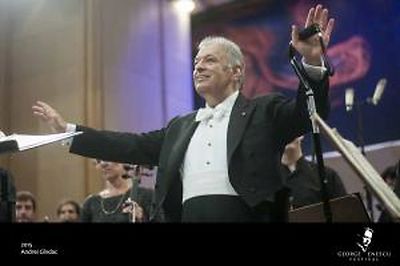