For half a century the International Festival Wratislavia Cantans has been the most important festival of classical music in this part of Europe. Decades ago it was the only opportunity to meet world-class artist coming from the West to a country behind the iron curtain. Nowadays outstanding conductors, instrumentalists and singers come to Wrocław to work on their joint projects with the ensembles of the National Forum of Music, the festival’s host. For the first time ever in Wratislavia’s history the audience and the musicians can share the state-of-the art concert hall of the National Forum of Music enabling the beauty of vocal and instrumental works shine in the full splendour. We invite you to celebrate music from 6 to 19 September. Long live Wratislavia!

The state-of-the-art NFM concert hall is an ideal place for Mahler’s monumental symphonies. The first guest orchestra to play in this venue will be the legendary Israel Philharmonic Orchestra presenting Mahler’s Symphony No. 9 under the baton of one of the best contemporary conductors, Zubin Mehta. The great finale of the 50th Wratislavia Cantans will be Mahler’s Symphony of a Thousand – his only work to have been enthusiastically received during Mahler’s lifetime. The name of the Symphony reflects the impressive performance forces envisaged by Mahler, and in Wrocław featuring the Warsaw Philharmonic Orchestra and Chorus, the three choirs of the NFM and soloists under the baton of Jacek Kaspszyk, who specialises in great symphonic repertoire.

The 50th anniversary of the festival must be celebrated with due pomp and scale! Wratislavia celebrates in a truly royal way at the courts of Cleopatra and Dido (a concert of arias themed around the two queens), an evening of song and dances to which citizens of Wrocław revelled centuries ago will be revived from the collections of Wrocław University Library. The starry line-up (Pinnock, Pasichnyk, Pires) will treat us to brilliantly virtuosic evergreens by Mozart, and the phenomenal B’Rock will strike spiritual chords in a programme called Jauchzet Gott (Praise Be to God). The more audacious music aficionados will let themselves be carried away by the trance mood of Stravinsky’s The Rite of Spring and Skriabin’s Prometheus performed by the Polish National Radio Symphony Orchestra under the baton of Alexander Liebreich.

An extraordinary attraction of the 50th Wratislavia Cantans will be revivals of some concerts of the first edition in 1966. This year’s opening concert repeats the programme which began the Wratislavia Cantans history. Though many will be surprised to hear contemporary works performed at this festival, presenting new music was one the founder Andrzej Markowski’s ideas. This is why works composed a few or a dozen years previously were programmed for the first concert on 14 August 1966. Which of them have stood the test of time? Which composers were to enter the canon for decades to come? We will find out on our journey in time. As during the first Wratislavia Mozart’s most beautiful liturgical work - The Mass in C minor – will please our ears in a performance by Il Giardino Armonico, in addition to a programme featuring works of Polish Baroque Masters: Marcin Mielczewski and Bartłomiej Pękiel. The very performance of early music has changed radically over the fifty years – today our knowledge of the aesthetics of bygone centuries is informed by insightful studies of old music treatises and the social background of those times. Nowadays early music is performed on historical instruments in small line-ups of solo voices. The music itself has not changed though, and is just as delightful as in the 17th and 18th centuries, in 1966 and in 2015.

The passionate research into early music goes on and continues to spark controversies. This year’s Wratislavia will invite Ensemble Organum and Marcel Pérès who have changed the way of performing plainchants, which led to idolatry from audiences on the one hand, and severe criticism on the other. The famous Tasto Solo group will revive the music of 15th-century manuscripts.

Giovanni Antonini, just as his predecessors, desires to present less known vocal traditions, different from Western European choral music, therefore Orthodox Christian music will come back to Wratislavia this year, performed by the Choir of the Moscow Patriarchate admired all over the world. The artistic director wants to keep Wratislavia Cantans young and adventurous, and therefore he has invited the ‘born mad’: Grammy-winning eighth blackbird and Agata Zubel.

Wratislavia also stands for chamber concerts of world-class artists; this year our audience will be treated to live performances of two superb violinists– Dymtr Sinkovsy will play during two concerts the complete Mystery Sonatas by Biber, and Enrico Onofri from Ensemble Imaginarium will convince us that the violin can speak. The peerless harpsichordist Pierre Hantaï will prove that the popular Goldberg Variations sound the best on a historical harpsichord. Our audiences will be able to check the assets of the chamber halls of the National Forum of Music, perfectly suited also for the perception of this kind of repertoire.

The concert conducted by Tadeusz Strugała will bring together three important anniversaries: this year see Strugała’s 80th anniversary, 60 years of his artistic activities, and the NFM Orchestra’s 70th anniversary. The festival will also reveal great musical treasures of Wrocław University Library – two concert-cum-exhibition events feature, among others, works whose scores were published in Venice in the 17th century and some of them have ben uniquely preserved in Wrocław.

Wratislavia Cantans is always a great musical celebration. The 50th anniversary edition honours both artists and organizers thanks to whom the festival has lasted and developed. The 50th edition is also a celebration of our audiences who have associated the beginning of September with sitting in the pews of chilly Wrocław churches filled with wonderful music. This edition is the first to combine the tradition of performances in historical interiors with the vast possibilities offered by the National Forum of Music. Combining tradition with contemporaneity and reverence for high art with artistic boldness are the keys to the success of our festival turning towards the future with curiosity and respect for its long and glorious history. Long live Wratislavia! 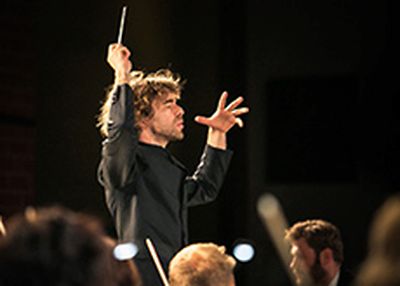