Gwangju Atelier: “We all leave determined to act”

The second Atelier for Young Festival Managers in Asia took place successfully in Gwangju, South Korea from 31 August to 6 September. Hosted by the Chonnam National University and the Asia Culture Center, the Atelier GWANGJU 2015 gathered 35 young festival managers from 20 countries and four continents, as well as seven renowned festival directors from across the globe. They are now part of The Festival Academy’s ever-growing Alumni Network, counting 335 alumni and 40 mentors and presenters, which will help them in their future collaborations and work.

The participants were inspired by the experiences of seven world renowned festival leaders in a Korea-focused atmosphere. General Atelier Coordinator Hugo De Greef moderated all sessions and shared his wealth of experience in initiating international festivals, projects and co-productions. Robyn Archer, Artistic Director The Light in Winter Melbourne, and Nele Hertling, former Vice President Academy of Arts Berlin, both long-term mentors of the Atelier, looked back at their career developments, and both agreed on the necessity of passion for what one does. Chiaki Soma, former Artistic Director Tokyo Festival, presented the reaction of the Tokyo Festival after the Great East Japan Earthquake in 2011 and how to use the arts in moments of devastation. Monique Veaute, President Fondazione Romaeuropa, introduced the difficulties of starting a festival from scratch in a new place and the passion needed to do so. Seonghee Kim, Artistic Director ACC Theater, introduced the reality of the arts and cultural sector in Asia and the challenges of opening such an important space. Marie-Hélène Falcon, Former Director Festival TransAmériques, talked about festivals as a sign of resistance. In addition to these presentations, in group discussions and one-on-one exchanges several topics were addressed, with a special focus on the relevance and the future of festivals, and aspects such as audiences, budget or leadership.

As one of the crucial ambitions of the Atelier is to connect the issues elaborated in the sessions to a concrete local cultural situation, a thorough cultural programme was an integral part of the Atelier schedule. The group visited cultural places such as the Unjusa temple, a unique temple with over 1000 Buddha statues, or the Gwangju Cultural Foundation, where a traditional Korean music and dance performance was staged for the Atelier. Furthermore, the Gwangju Atelier had the unique opportunity to witness the opening of the Asia Culture Center, a complex built to bring Gwangju to the forefront of Asian arts, and to attend some performances of the Opening Festival.

Participants highlighted the generosity and potentiality of their colleagues and their "hunger" for new exchanges, knowledge and future collaborations. “There is an amazing amount of knowledge and experience in here that can be shared and learned from. Giving space, time and structures to unfold this knowledge, recognising the potential and ceasing the opportunity was what we tried to do this week,” said Grey Yeoh and Simone Truong, participants of the Atelier, at the end of the week to sum up the experience.

The Atelier provides this space and time, as was underlined also by Inge Ceustermans, Managing Director The Festival Academy, who is convinced that the arts can help to find answers to current societal issues. She said: “The Atelier is a place to imagine a better world and to formulate those answers.”

As in previous Ateliers, the Gwangju group is aware that the gathering in South Korea is only the beginning: participants, presenters and organisers alike left the Atelier energised and eager to put the inspiration into practice.

Robyn Archer said: “I think one of the powerful aspects of each Atelier is that both participants and mentors all leave with a feeling of impatience. We are inspired by many things that are said, frustrated by the things that are not said, or not said in enough depth (because one week is never enough), but we all leave determined to act, to try to put into place the ideas or practices which have been given to us, or which have occurred to us, during these days.”

To recap the Atelier in Gwangju, check out: 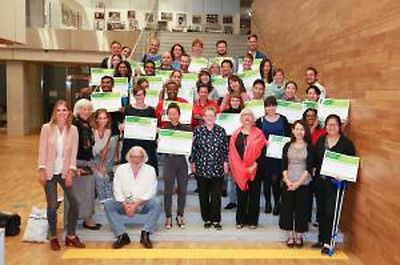