[PRESS RELEASE - Brussels, 24 September 2015] The Festival Academy, an initiative of the European Festivals Association (EFA), continues extending its offer for training in festival management. Since its launch in 2013, new education formats have been initiated based on the success of the Atelier for Young Festival Managers. The Atelier was developed into a regular training for artistic festival directors with two editions per year. As of 2016, The Festival Academy will add a course for production managers to its programme. The most recent Atelier in Gwangju, South Korea, confirmed the success and necessity of providing training opportunities for early career professionals and to collaborate across continents. Participants joined the ever-growing Alumni Network counting currently 335 future festival leaders from 65 countries.

“Our main concern are the arts and encouraging international collaboration. Not only do we address various fields of festival management; we also explore diverse artistic and cultural contexts by organising our trainings across Europe and beyond. EFA, under the management of Secretary General Kathrin Deventer, and The Festival Academy, under the coordination of Hugo De Greef, are continuously exploring new collaboration opportunities. In line with this, we will further expand the reach of our initiatives in terms of choice of location, partnerships, participants and presenters,” says Darko Brlek, President EFA/The Festival Academy.

The Atelier for Young Festival Managers in Gwangju (31 August to 6 September 2015), hosted by the Chonnam National University and the Asia Culture Center, paved the way for the upcoming Ateliers to take place in Budapest, Hungary from 2 to 8 June 2016 in collaboration with the Armel Opera Festival, and in Chiang Mai, Thailand organised from 1 to 7 December 2016 in collaboration with the Thailand Convention and Exhibition Bureau. 2016 celebrates 10 years of the Atelier with the 10th edition in Budapest.

“The Festival Academy is about human capital and development. Looking back at almost ten years of the Atelier for Young Festival Managers, we aim to develop the Academy into the primary resource for festival training and to extend its offer to new target groups. We are convinced of the need and potential of this network of future festival leaders at a time when everything is measured in terms of direct revenue and numerical results,” says Inge Ceustermans, Managing Director of The Festival Academy.

“The Atelier was an extremely valuable professional and life experience for skills development, capacity- and confidence building, plus it gifted me with bounds of renewed inspiration and a wonderful new network of colleagues and friends,” says Michelle O’Brien, participant of the Atelier Poznan 2014.

“As mentors and presenters I know we will get at least as much out of the participants as they may get out of us. It should be understood at the outset that there are very few differences between mentors and participants, except perhaps in terms of experience,” says Robyn Archer.

In addition to the Atelier for Young Festival Managers, The Festival Academy launched the Festival Readings in 2013. The newest programme launched in 2015 is the Festival Production Management Training, with the main goal to equip production managers with the skills needed to realise the artist’s and the artistic director’s vision. The first edition will kick off in January 2016 in collaboration with deSingel International Art Campus Antwerp. Production managers can apply until 30 September 2015.

Latest updates can be found at www.TheFestivalAcademy.eu and on Facebook.

The European Festivals Association (EFA) is the umbrella organisation for festivals across Europe and beyond representing about 100 festivals, national festival associations and cultural networks from 40 countries. EFA initiated the Atelier for Young Festival Managers in 2006; since 2013 it has been organised by The Festival Academy. The Festival Academy and the European Festivals Association thank for their support: the European Commission and the City of Gent. 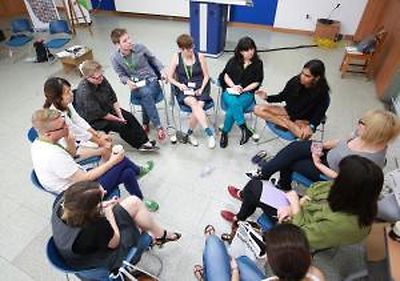