The Yerevan Perspectives International Music Festival launched its autumn season with the Israel Philharmonic Orchestra, led by music director and conductor Zubin Mehta, on 3 September in Yerevan, Armenia. The concert was a huge success, and was one of the highlights of the festival season. The upcoming concert closing the autumn season by The Academy of St. Martin in the Fields, with its music director and soloist Joshua Bell, will take place on 15 November at the Aram Khachaturian Concert Hall.

The concert series "With you, Armenia" organised in cooperation with the Yerevan Perspectives International Music Festival continues its triumphal success.

Six remarkable concerts commemorating the centenary of the Armenian Genocide (1915-2015) took place at some of the most prestigious concert halls around the world: Carnegie Hall in New York; Bozar in Brussels, Academy of Santa Cecilia in Roma, Tallinn, London and Jerusalem, with the participation of world famous musicians such as Pinchas Zukerman, Evgeny Kissin, Maxim Vengerov, Mischa Maisky, Daniel Harding, La Scala and the Royal Philharmonic Orchestras as well as other finest soloists, conductors and orchestras of our days.

The closing concert will take place in Vienna at Musikverein Golden Hall on 7 November with the participation of Camerata Salzburg, Salzburg Bach Choir, John Axelrod and other leading soloists and opera singers. 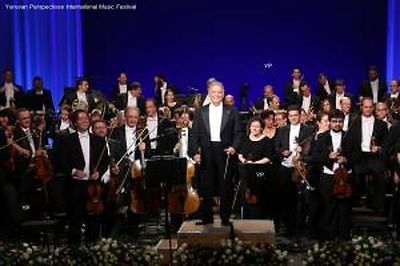