[19 November 2015, Bucharest, Romania] The Principal Conductor of London Philharmonic Orchestra and Artistic Director of the State Academic Orchestra of Russia “Evgeny Svetlanov”, Vladimir Jurowski, is the new Artistic Director of George Enescu International Festival in Bucharest, Romania. The positon is honorary and will take effect immediately. In a press conference to be held in Bucharest on 30 November, Vladimir Jurowski will share his vision and the artistic direction for the Enescu Festival 2017. Among the highlights of the 2017 Edition’s programme are pianist Lang Lang and Orchestra del Teatro alla Scala di Milano.

Held every two years in Bucharest, Romania, and bearing the name of the famous Romanian composer George Enescu, the Enescu International Festival enters a new stage of international development, with the tandem Vladimir Jurowski as Artistic Director and Zubin Mehta as Honorary President starting 2017 edition. Renowned Zubin Mehta has been a friend of the Enescu Festival since the 1964 edition. The Enescu Festival is the largest cultural event organized by Romania and features over 2,500 of the most renowned artists and orchestras of the world in each edition.

Vladimir Jurowski is currently Principal Conductor and Artistic Advisor of London Philharmonic Orchestra and Artistic Director of the State Academic Orchestra of Russia “Evgeny Svetlanov”. Starting from September 2017, Vladimir Jurowski shall become Artistic Director and Chief-Conductor of Berlin Radio Symphony Orchestra (Rundfunk Sinfonie-Orchester Berlin). He also was Music Director of the Glyndebourne Festival and holds the title of Principal Artist with the Orchestra of the Age of Enlightenment. He has served as Principal Guest Conductor of the Russian National Orchestra from 2005 to 2009. He was also First Kapellmeister of Komische Oper Berlin between 1997 and 2000 and Principal Guest Conductor of Teatro Communale di Bologna between 200 and 2003.

Vladimir Jurowski is acclaimed for his incisive musicianship and adventurous artistic vision, and his deep commitment to the social and humanitarian value of culture, and its vital role in challenging censorship and conflict.

Vladimir Jurowski made his international debut in 1995, at Wexford Festival, where he conducted Rimsky-Korsakov’s May Night. Next year saw his brilliant debut at the Royal Opera House Covent Garden in Nabucco. He conducted the Metropolitan Opera of New York for the first time in 1999 and made his debut with Philadelphia Orchestra in 2005. He has been guest-conductor with many of the world’s leading orchestras, including the Berlin and Vienna Philharmonic, Royal Concertgebouw, Bavarian Radio Symphony, New York Philharmonic, Boston and Chicago Symphony and Cleveland Orchestra, Staatskapelle Dresden and the Gewandhausorchester Leipzig, Accademia Nazionale di Santa Cecilia, to mention only a few. Jurowski’s operatic engagements involved Metropolitan Opera, Welsh National Opera, Opéra National de Paris, La Scala Milan, Dresden Semperoper, Glyndebourne Festival Opera and Bavarian State Opera Munich. 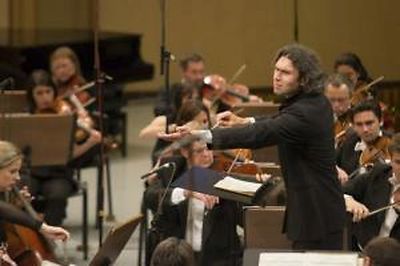