Darko Brlek (EFA President and General and Artistic Director of the Ljubljana Festival) pointed out that the situation in Europe is quite different from when EFA first met the Commissioner. In a tragic time where borders are being rebuilt, EFA continues its work of crossing them as it always did. By, for example, initiating projects that engage a wider group of festivals such as EFFE – Europe for Festivals, Festivals for Europe and through the collaboration in other continents with training programmes in Korea, Lebanon and Thailand. Darko Brlek reminded that Culture needs nonetheless the support from national governments and the European Commission if it is to continue to bring benefits to society.

The Commissioner congratulated EFA on the success of the EFFE pilot project, which has reached out to almost 900 festivals that have applied for the EFFE Label. EFFE can become a reference of quality, innovation and impact in Europe. The Commissioner confirmed that the European Commission and the European Parliament are ready to engage in future developments, to be announced very soon.

The Commissioner welcomed EFA’s initiative of extending the Atelier for Young Festival and commended EFA on its selection of third countries. Implementing this EFA training programme in China in the frame of the EU-China People-to-people Dialogue is of high importance. The Commissioner is engaged in looking for possibilities so this opportunity is not wasted.

The responsibility of festivals in today’s society is acknowledged and agreed upon by both parties. As the Commissioner stated “Intercultural dialogue helps us to identify both what distinguishes us from each other and what we have in common. It is essential in overcoming mistrust and prejudice, and critical in handling and preventing conflict within and between cultures. This is how, ultimately, intercultural dialogue allows us to build a community in Europe.”

Furthermore “In supporting intercultural dialogue, the Commission relies on the ideas, networks and capacities of many partners. Bringing this diverse range of policies and projects to life would not be possible without the European Parliament, authorities and cultural institutes in the member states as well as organisations like the European House of Culture and the European Festivals Association. We will need to continue to work together.”

EFA thanks the magnificent group of festivals that brought important and relevant arguments to each of the topics on the agenda and shall follow-up on these topics and expressions of engagement from the Commissioner and take them up again from now until the next Round Table in 2017. 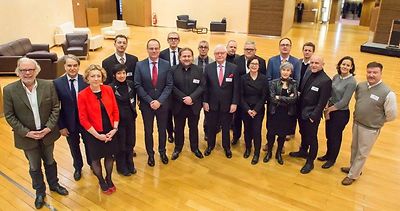