Launch of EFA BOOK 6, Beyond Visions: A policy on culture in Europe

EFA and the European House for Culture are happy to present the sixth publication in the EFA book series, Beyond Visions: A policy on culture in Europe. This new book features essays from leading lawmakers from the European Institutions on the future of cultural policy in Europe. Nine of Members of the European Parliament and the Commissioner for Education, Culture, Youth and Sport were invited to contribute to this volume. They shared their personal visions for the role culture can play in European policy development and decision making.

In the book Silvia Costa, Member of the European Parliament and Chair of the Committee on Culture and Education, stated: “Europe must set its own cultural agenda, even if cultural policy is a Member State competence. Cultural policy is a sensitive issue and the privileged area for expressions of territorial and national identity. Nonetheless, the EU has the right and the duty to intervene, in accordance with the Lisbon Treaty’s principle of subsidiarity.”

The essays are part of an ongoing campaign the European House for Culture has been working on called The Decisive Deal: A European Resolution on Culture, For Values, Democracy and Citizenship. It was a participatory process to gather ideas on cultural policy from across Europe and advance them during various events and online over the last several years.

The participation of a Commissioner and nine MEPs demonstrates the European institutions strong commitment to culture. You can read that Tibor Navracsics, European Commissioner for Education, Culture, Youth and Sport, says that “In supporting intercultural dialogue, the Commission relies on the ideas, networks and capacities of many partners. Bringing this diverse range of policies and projects to life would not be possible without the European Parliament, authorities and cultural institutes in the Member States as well as organisations like the European House of Culture and the European Festivals Association. We will need to continue to work together.”

Between the introductory essay by Vânia Rodrigues, Arts Manager & Consultant and Member of the European House for Culture, and the ideas presented by the policy makers, a clear work plan and mission for the cultural sector is clear. It is now up to you to join them in that mission or inspire new ideas and goals they should be reaching for.

It is our hope that the Resolution and this publication will inspire action in the European Institutions, in the Member States at large, as well as the local level. We invite you to join us in this collaborative work process.

For more information and to purchase the book visit www.efa-aef.eu/en/initiatives/publications/. Full PDF here. 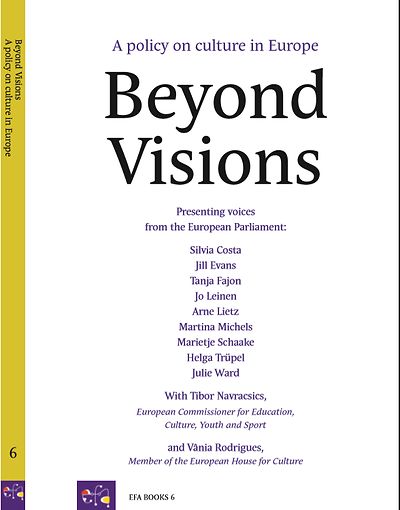