The 31st Merano Music Weeks – a festival for true connoisseurs

You simply have to plan a stay in Merano between 23 August and 22 September if you’d like to hear outstanding and refined symphonies in one of the most beautiful concert halls of the Alps. The 31st edition of the Merano Music Weeks returns to the city and surely won’t disappoint the visitors flocking to the garden and thermal bath city of Merano for a festival which has become a classic in the South Tyrolean event calendar. The opening concert is one of the first highlights of the programme: the Orchestra Filarmonica della Scala from Milan, one of the most respected Italian orchestras, will be performing on the night of 23 August against the backdrop of the splendid Art Nouveau atmosphere in the Kursaal. The able hands of its conductor, Riccardo Chailly, will lead the orchestra on that night.

The closing concert on 22 September is quite a spectacle in itself. Teodor Currentzis – the young rising star in the international orchestra conductor scene, will be guiding the orchestra along on that night. The young musical savant built his credentials and an operatic empire in the Siberian town of Perm, and will delight the South Tyrolean city with a performance aided by the Mahler Chamber Orchestra (featuring soloist Pekka Kuusisto).

The Merano Music Weeks have grown into a premium festival over the course of three decades. This year is no different than the others, for next to the tried-and-tested programme the festival will also feature new offers. These include a new series of concerts titled ‘barocco’, to premiere on 25 August with the Concerto Köln, and a series of filmed concerts to be shown on the main square of the thermal baths under the name of ‘Prelude’.

You may be wondering what exactly lies behind the success of the Merano Music Weeks? The beautiful thermal city itself is one possible answer, of course, being a bastion for wellbeing and thus an ideal host for the series of concerts. But it’s more than just that. What about the unique stages scattered around the city and the numerous sites lying just a stone’s throw away such as the Palais Mamming, the parish church, the spacious square in front of the thermal baths, the fresco hall in Schenna Castle, the parish church in Lana di Sotto with its impressive Schnatterbeck altar (which is one of the most important works of art from the late Gothic period in South Tyrol), or the large mediaeval hall in Tirol castle. Merano is always well worth a visit, and not just for fans of classical music. 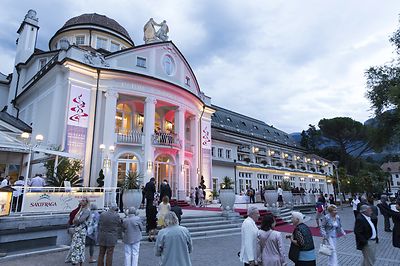