In 2016, the Festival, inspired by the “East-West” theme, aspires to be a new voyage, a round trip featuring many concerts tinted with East-West influence, real blends of music ahead of their time performed at each festival. It was without any prescience of how this choice of theme would resound after the events that occurred in Brussels last March.  This somewhat “disoriented” festival will be dedicated to the victims of the terrorist attacks.

The guest of honour is Mathias Énard, winner of the Goncourt Prize 2015 with his book “Bousolle” [Compass].  His book tells the story of a long voyage by an orientalist musicologist who sets out from Vienna, travelling ever eastward, all the way to the Far East, smitten by music ranging from Szymanowski to a Muezzin’s chant. The story of the festival's theme!

Moreover, two projects will run through the Festival, and among the 150 concerts on offer, the focus will fall on a musician at ease in all types of music: Keyvan Shemirani, a Persian percussionist, and on the traditional “family” project, which this year, ever under the stewardship of Patrick Leterme, will lift the veil of the Japanese “Yokai” stories and spirits.

Festival de Wallonie runs from 10 Juin to 22 October and takes place in various cities all over Wallonia. More information about the programme can be found here. 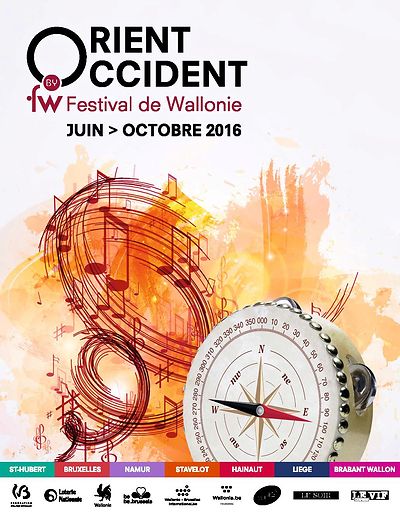