Beyond Visions Book Launch - 30 May 2016 at the European Parliament

On 30 May 2016, EFA, the European House for Culture, and Member of the European Parliament Mr. Jo Leinen launched the sixth edition of its EFA BOOKS series, Beyond Visions: A policy on culture in Europe, at the European Parliament.  In addition to Mr. Leinen, contributing MEPs Ms. Julie Ward and Mr. Arne Lietz joined over 50 guests to discuss the visions set forth in the book.

It is our hope that the Resolution and this publication will inspire action in the European Institutions, in the Member States at large, as well as the local level. We invite you to join us in this collaborative work process.

To order email info@efa-aef.eu and for a Full PDF click here.

Below you will find the full text of the speech by Mr. Hugo De Greef, Board Member and Co-founder, European House for Culture

Today, EFA and the European House for Culture are happy to present the sixth publication in the EFA BOOKS series, Beyond Visions: A policy on culture in Europe.

EFA considers reflections and critical attitudes in the EFA mission essential. A cultural network today in Europe is there to serve their members, as EFA does of course very intensively through a major number of activities, but as important for a network is to deliver opinion, comments, information to the broader cultural community in the world. So the other EFA books, still available, are publications that are useful for all of you as well.

This new book ‘Beyond Visions’ features essays from leading lawmakers from the European Institutions on the future of cultural policy in Europe. Nine of Members of the European Parliament and the Commissioner for Education, Culture, Youth and Sport accepted our invitation to contribute to this volume. They shared their personal visions for the role culture can play in European policy development and decision making.

We are happy to launch this publication here at the European Parliament and to be hosted by Mr. Jo Leinen. As a Cultural Coalition, we are happy to continue our join work with him and his colleagues, who wrote in the book, through this publication. We know they all will continue to support the visions as the go from the pages of this book to reality through their work at the European Parliament.

The book and our invitation to write these essays are part of an ongoing campaign the European House for Culture has been working on called The Decisive Deal: A European Resolution on Culture, For Values, Democracy and Citizenship. It is a participatory process to gather ideas on cultural policy from across Europe and advance them during various events and online over the last several years.

With the members of the European House for Culture we’re organising yearly the Brussels Conversations, a talk on this topic by the members and their guests. In these talks the European Resolution on Culture is discussed and formulated. It gives very shortly the essence of what we all think are the most important concerns to be answered in a policy on culture in the European Union as well as in every member state.

The essays presented in this book serve as the next steps in that process towards realising the European Resolution on Culture. They consider the role culture plays in citizenship across Europe and envision the mutual responsibility that culture and Europe bear towards one another. They represent the individual visions of nine Members of the European Parliament, from the Progressive Alliance of Socialists and Democrats, the European United Left/Nordic Green Left, Greens/European Free Alliance, and the Alliance of Liberals and Democrats for Europe.

The participation of a Commissioner and nine MEPs demonstrates their individual strong commitment to culture. Of course we’ve invited many more MEP’s to give their vision on the theme. Most of them didn’t write, but no worry the invitation is still open. With this book in our hand we will ask again to other MEP’s to give their opinion and views. So we hope and plan to have more essays soon from more of your colleagues.

In general, for this book, we wanted to know their personal thoughts about where cultural policy in Europe is headed and what they hoped it would achieve.

Their ideas presented a clear work plan and mission from the side of the institutions. It is now up to us to join them in that mission or inspire new ideas and goals they should be reaching for. They were not lacking in ideas, so please read the book to find out everything they are working on and think of ways you can take part.

But this book is as well an invitation for action. This book of essays together with our grass-roots initiative surrounding the resolution on will inspire action in the European Institutions, in the Member States at large, as well as the local level. We invite you to join us in this collaborative work process. We invite you to bring this discussion on the formal agenda of the European Parliament. We invite you to sit around the table with the member states on this exceptional agenda. These days Europe needs more than ever a reason for being that Europe of Values, Democracy and Citizenship.  The authentic position of culture in our society is apparent. But it can be an instrument to bring people together, to communicate on values, to give the citizens a sense of belonging, to make Europe their Europe!

Please take a copy with you today, share the news of its release through your network, and use it as a guide for your policy work.

Board Member and Co-founder, European House for Culture 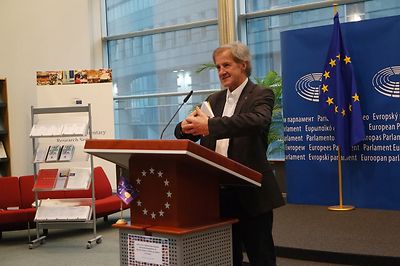