In August the world-renowned London Symphony Orchestra visits Ljubljana with conductor Gianandrea Noseda. We will also be hosting an acclaimed soloist, the violinist Sergej Krylov, accompanied by the Lithuanian chamber Orchestra. An atmosphere of a different kind will be provided by Vida! – an evening of flamenco – and Sissi – a gypsy-inflected dance spectacular from Budapest. The programme also includes two hit Slovene musicals: Cvetje v jeseni (Blossom in the Fall) and Mamma Mia! Legend of Slovene rock and folk music Vlado Kreslin will be celebrating twenty-five years of concerts at the Ljubljana Festival on the Križanke stage.

Violinist and conductor Sergei Krylov, who in his long career worked with the famous cellist Mstislav Rostropovich, will be appearing at the Ljubljana Festival with the Lithuanian Chamber Orchestra. The renowned artist has also worked with many famous conductors and appeared on the world’s most famous stages. For his Ljubljana appearance he has selected favourite works by composers who were themselves eminent violinists. Vivaldi's famous cycle, consisting of four violin concertos of three movements each, takes listeners through the four seasons of the year. The second part of the programme is devoted to the Spanish musical tradition, full of virtuosity and passion. It begins with a suite arranged for violin by the Polish violinist Paul Kochanski with the blessing of its composer Manuel de Falla. This is followed by two works by Pablo de Sarasate, including the attractive Carmen Fantasy based on the most famous melodies from Bizet's opera Carmen. (23. 8.)

The London Symphony Orchestra will appear in Ljubljana under the leadership of the famous conductor Gianandrea Noseda. Hailing from a city with a rich musical tradition, the LSO is actually London's oldest symphony orchestra. It gives around 120 concerts each year alongside some of the biggest names in music. The LSO is also committed to musical education and runs a programme called LSO Discovery that reaches more than 60,000 people every year. The soloist this evening is the Slovene violinist Lana Trotovšek, whose burgeoning career has already seen her work with some of the most eminent names in the classical music world. It was with a work from tonight's programme, Prokofiev's Violin Concerto No 1, that she enjoyed her successful debut with the Mariinsky Theatre Orchestra under the celebrated Valery Gergiev in 2012. (24. 8.)

A summer of dancing

Flamenco dancer Soledad Barrio is a founding member of the dance company Noche Flamenca together with her husband Martín Santangelo, the group's founder and artistic director. The mission of Noche Flamenca is to create a diverse theatrical body of performance through singing, music and dance that expresses a rigorous, spell-binding aesthetic in the form of flamenco; one that exceeds the highest artistic expectations. The company strives to captivate its audiences through its live performances and to evoke in them the vivid and expansive sea of passion and emotion that is flamenco. Through its educational outreach and residency programmes, the company seeks to educate and enlighten people of all ages, races and economic backgrounds with regard to the authentic form of flamenco – a form born of ancestral cultural repression and racial expulsion. (25. 8.)

Sándor Román has been performing since the age of 10. Having trained in the USA, Canada and Europe in folk dance, classical ballet and modern dance techniques, he has enjoyed a rich career focused on revolutionising the culture of Hungarian folk dance. In 2000 he founded his own dance company, ExperiDance Production, with which he inventively combines Hungarian folk dance and modern dance. He has created a unique dance style, which he has showcased in a series of breathtaking productions that have enjoyed huge success. The new show, Sissi, transports the audience to the imperial court of Austro-Hungary. The episodes from the night of the grand ball, full of yearning unfulfilled desire, are inspired by the legend of the beautiful Sissi, the "rebel empress", and bold Count Andrássy. The third figure in this love triangle is a beautiful Gypsy girl. The show brings together 28 dancers from the ExperiDance Production troupe and 40 soloists from the Budapest Gypsy Symphony Orchestra. (29.–31. 8.)

"I was shaken by a love that was like a storm, like a tempest! It was late in coming, yet come it did, just as fruit trees sometimes blossom in late autumn. But like the autumn blossom, it bore no fruit." With these words Ivan Tavčar's protagonist Janez, a wealthy lawyer from the city, begins the tale of the love of his life – Meta, a young peasant girl. Janez plans to leave the city and move to a farm, where he and Meta will crown their love with marriage, but this dream is shattered by Meta's sudden death. The script closely follows Tavčar's original work while at the same time offering a number of connections to present reality. Musical Blossom in the fall has been delighting audiences throughout Slovenia since its premiere in 2014, with frequent standing ovations for cast and crew. (17. 8.)

The programme of the 64th Ljubljana Festival will also feature two repeat performances of the exceptionally successful musical Mamma Mia!, which in less than one year since its première at Križanke has enjoyed more than 60 repeat performances and has been seen by more than 60.000 people. The action takes place on a Greek island and presents a romantic story full of optimism and vital energy. The musical is packed with hits by Swedish superstars ABBA, through which we get to know Donna, an independent-minded single mother who doesn't need a man to feel fulfilled, and her 20-year-old daughter Sophie, who dreams of romance, babies and a fairy-tale wedding. Mamma Mia was co-produced by the Ljubljana Festival and the production studio of Jurij Franko, a Slovenian former alpine skier best known for winning silver in the giant slalom at the 1984 Winter Olympics in Sarajevo. (21. -22. 8.)

To make the summer even more relaxed

Slovenian rock and ethno music legend Vlado Kreslin will host his annual concert, which always features an interesting selection of guests. His first appearance on the Festival’s Summer Stage, in the Križanke complex, was with the musicians of the legendary Beltinška Banda, a folk group from Beltinci in Slovenia’s north-eastern Prekmurje region, in 1991. Since then he has performed in this venue with various bands featuring a wide range of musicians and numerous guests from Slovenia and abroad. This year he will take the stage with his longrunning rock band Mali Bogovi, the veteran folk group Beltinška Banda (featuring his 88-year-old father, Milan) and special guests – the Slovenian Army Big Band conducted by Rudi Gas. (26. 8.) 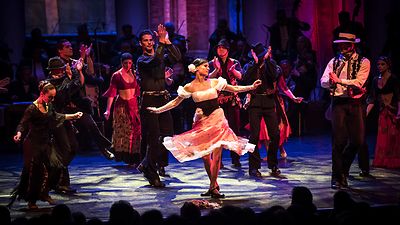