Panorama of the XIV A. Sakharov International Art Festival

From 30th May to 17th June XIV A. Sakharov International Art Festival was held in Nizhny Novgorod (Russia). For three weeks 14 concerts took place in conjunction with workshops and presentations.
An audience could also enjoy an exhibition of local artists “The music sounds here!”
World famous artists as Denis Matsuev, Vladimir Spivakov, Sergej Krylov, Yuri Bashmet along with Borodin State Quartet and Galina Vishnevskaya Opera Centre was among the participants.
The variety of genres was also the specificity of the Festival.  Symphonic, choral and chamber music. Opera and jazz. Classic masterpieces and contemporary music.

Some of the concerts have passed under the sign of the Theatre. The performance of great Russian actor Sergei Yursky “One-man Theatre. The known – unknown”, the musical-poetic project “Faces of Shakespeare” by organist Evgenya Krivitskaya and actor Petr Tataritsky as well as a bright Leoncavallo’s opera “Pagliacci” played by the artists of Galina Vishnevskaya Opera Centre were among them.

The international contacts, assertion of classic music and dialogue of arts became the main ideas of the Festival.

The festival was opened with the concert of the world famous pianist Denis Matsuev. For the Sakharov festival he chose the most complicated program. Pianist has performed works of Russian composers of the first half of XX century. Matsuev gave the tribute to 125th anniversary of Sergei Prokofiev by playing his “Piano Concerto No. 2”. He has also performed “Rhapsody on a Theme of Paganini” of his beloved and esteemed composer Rahmaninov.

But the main emphasis on the first Festival’s evening had “Prometeus” (“The Poem of Fire”) by Skriabin.  This is the piece that is rarely performing and requiring of a certain courage and emotional impact from all the participants.

The opening of the XIV International art festival has become a celebration of classic music which “is healing the human souls in these difficult times and becoming a breath of fresh air for everyone who lives on the Earth” (Denis Matsuev).

One of the key ideas of the Festival was the development of creative contacts and strengthening of cultural connections between Russia and other countries. Following this concept the organizers of the Sakharov Festival has offered to the audience an extensive international program as The Days of France (1st and 10th June), The Dutch Days (2nd and 3rd June) and concert “New Opera Names of America” (9th June). The palette of the concerts and genres were really various. From opera to jazz. From modern “pure music” to synthetic art.

The Days of France has opened by a performance of the French jazz group “Rimendo” which was established in 2012 by the pianist and arranger Virgini Peiral. Her creative ideas were supported by the other group members such as Julien Alour (trumpet & horn), Sylvain Dubrez (contabass), Nicolas Group (percussion) and charming singer Lou Tavano with a soft and strong voice. They were not only a professional jazz musicians but also open mind, spontaneous, internally free persons who likes experiments with jazz and poetry.

That evening poems of the famous French poets of different epochs and styles (Aragon, Apollinaire, Baudelaire, Prévert) which once became a songs of famous French “chansonniers” (Brassens, Ferré, Gréco) was performed in a new original arrangement like it could be conceptualized and felt by the people of the XXI century.

The Days of France was continued on 10th June by a performance of Mikhail Rudy who is famous now not only as charismatic pianist but also as an author of synthesized projects connecting music and visual art.

His new project “Geniuses of Animation” was inspired by unusual animated films of Russian-French graphic artist and animator Alexander Alexeieff and his follower Norman McLaren.

In this project Rudy wasn´t only a piano player, but also a creator of sounding canvas of the animated films. And he was actually very attentive and highly sensitive to a mood of each film.

Surrealistic world of Alexander Alexeieff (“The Nose”, “Pictures at an Exibition”, “Three themes”) was fulfilled with the sounds of Prokofiev’s “Visions fugitives” and Mussorgsky’s “Pictures at an Exhibition”.

Introducing of musical traditions and culture of the Netherlands to the Russian audience was the main desire of the organizers of The Dutch Days. Percussionist Dominique Vleeshouwers held a workshop for children “Body Percussion” and demonstrated some innovations in the field of the music education. The managing director of Donemus Publishing Davo van Peursen has organized the presentation on Dutch contemporary music scene.

However, in the center of attraction was two concerts with an academic music of the Netherlands (Diepenbrock, Veldhuis, ten Holt).

“Canto Ostinato” written by S. ten Holt in technique of minimalism was really kind of leitmotif of The Dutch Days.

The orchestral version of “Canto Ostinato” for the first time was performed outside the Netherlands here, on Sakharov Festival by an Academic Symphony Orchestra of Nizhny Novgorod Philharmonic Society under the baton of Dutch conductor René Gulikers.

“Canto Ostinato” was also performed by a Dominique Vleeshouwers and Moscow Contemporary Music Ensemble. Voices of vibraphone, piano, synthesizer and marimba has created a new image of piece.

There was no longer a breathing orchestral giant but a fragile vibrating mechanism. Chamber performing of “Canto Ostinato” was accompanied by a film “Holland from above” (by Karell Tomei & Jeroen van Veen) with pictures of the Dutch landscapes. It seemed like it was a contemporary art performance full of harmony and respect to the Netherlands.

The International palette of the Sakharov festival was supplemented with a concert “New Opera Names of America”.

Audience was highly impressed by their artistic skills, virtuosity and beautiful voices.

A disclosure of the different aspects of world classic music was one of the most powerful ideas of XIV Sakharov International Art Festival.

A. Yurlov Russian State Choir Capella (artistic Director and Chief Conductor – Gennady Dmitryak) has performed a monumental works by Tchaikovsky and choral miniatures by his contemporaries.

Concert of the Chamber orchestra “Moscow Virtuosi” under the baton of Vladimir Spivakov was marked by the harmony and elegance of Mozart and Haydn’s orchestral music.

An unusual view to the classical heritage was demonstrated in the Retro Concert.

It was a reconstruction of the historic concert which took place in Gorky (previous name of Nizhny Novgorod) on 12th November, 1962.

That day, 54 years ago, great Russian composer Dmitry Shostakovich once in his life has stood on the podium and conducted his own works. Famous Russian singer Galina Vishnevskaya has performed a world premiere of the Mussorgsky “Songs and Dances of Death” with instrumentation of D. Shostakovich. And also after 25 years of oblivion, Intermissions from Shostakovich’s opera “Katerina Izmailova” was played by a philharmonic orchestra under the baton of Mstislav Rostropovich.

In our time on the Sakharov festival the Academic Symphonic Orchestra of Nizhny Novgorod Philharmonic Society under the baton of Alexander Skulsky has performed the same program.

The role of Mstislav Rostropovich was played by a young cellist from Romania, Andrei Ionita who recently became a laureate of the XV International P.I. Tchaikovsky Competition.

And the role of Galina Vishnevskaya was played by a Moscow singer Irina Moreva.

The Retro-concert wasn’t only repetition of the concert which took place long time ago. It was a look through time and space comprehending the delicate connection between past and present of great music.

XIV Sakharov International Art Festival was finished on 17th June with a performance of the violinist Sergey Krylov and chamber ensemble "Soloists of Moscow" under management of Yury Bashmet. It was the end of a three-week festival way, filled with a musical surprises, joy and aesthetic pleasure.

In the first part of the concert Sergey Krylov has performed a famous cycle “Four Seasons” by Vivaldi on a wonderful A. Stradivari’s violins from the State Collection of Unique Musical Instruments of the Russian Federation.

Festival ended up with the sounds of the famous Air of I.S. Bach from the Third orchestral Suite.

On the one of the Festival’s press conferences the artistic Director of the Festival Olga Tomina has noted. “The Sakharov Festival is focused primarily on the development of the ideas of peace, beauty and love for music. That’s why it has a name “Russian art and the World”. Because the art it’s a great power uniting people, no matter where they live or what language they speak”. 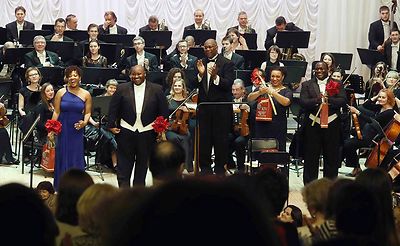