The 12th International D-Marin Classical Music Festival will begin on 20 August Saturday at 09.00pm, on the D-Marin Turgutreis Main Stage with the performance of Idil Biret, one of the greatest piano virtuosos of the music world, who’ll be accompanied by the Presidential Symphony Orchestra. On the programme of the opening night where Idil Biret will be given the “Honor Award” by D-Marin Music Festival, her masterpiece as the outstanding reinterpretation of Piano Concerto in A Minor will be performed, integrated in Edvard Grieg’s repertoire. Having one of the most extensive piano repertoires, Biret graduated from one of the most established music schools, the Paris Conservatoire, within the high honor list along with the First Prize diploma. When Biret was only 8, she gave her first recital at the Paris Radio, which led to countless awards and records, rightfully earning the admiration of the classic music world. Being an undeniable source of pride for Turkey, Idil Biret is still an extraordinary artist performing at the world’s leading concert halls, composing special records as part of her 75th birthday celebrations.

Fazıl Say and Young Stars are united for the first time

Fazıl Say will be taking part in the festival accompanied by young musicians, a special project for his first appearance at the 12th D-Marin Classical Music Festival on 22 August Monday, at 09:30 pm, at the Bodrum Castle. Frequently appearing at today’s leading music festivals, Dorukhan Doruk will perform the Dört Şehir (Four Cities) Piano and Cello Sonata partaking in Say’s classics. Say’s piano and violin sonata will be performed by Berfin Aksu, one of the most brilliant and promising violinists, honored by critics for her interpretations. Pianist Iraz Yıldız, as one of the new generation of young Turkish soloists, will treat the audience with a surprise programme. Vocal soloists and young talents of the Nâzım Hikmet Choir; Seda Taşpınar, Uğur Okay and Gülcan Burcu Değirmenci will stage their own interpretations of Fazıl Say’s songs.

Mediterranean Breeze at the Festival

Nominated many times for the “Best Latin Music Singer” at the Grammy Awards, Spanish composer and actress Monica Molina’s performance along with a special orchestra will take place at D-Marin Turgutreis Main Stage on 23 August Tuesday, at 09:00 pm.

For the first time, accompanied by the symphony orchestra, the Spanish diva who mentions her affection for Turkey at every occasion, will present her new album Mar Blanca which earned general appreciation with her interpretation of Molina’s father’s songs.

Another world-famous name that we’ll be watching live at the Bodrum Castle is Lura, who raised world-wide attention by singing “Flor Dinhaesperanca” in the movie Fados by Carlos Saura in 2007. Clinching her rising career and performing duets with names like Paulino Vieira, Bonga and Paula Flores, Lura will present an anthology of her earlier and latest songs on Saturday 27 August, at 09:30 pm in Bodrum Castle.

Globally known orchestras are also at this year’s festival

Considered as one of the England’s eligible chamber orchestras, Maestro Vladimir Ashkenazy and the London Chamber Orchestra will be hosted by the 12th International D-Marin Classical Music Festival on 21st August Sunday, at 09:00 pm, on the D-Marin Turgutreis Main Stage. With the accomplished lead of Vladimir Ashkenazy, the orchestra will be accompanied by the classical music’s rising talents: pianist Daniel Kharitonov and trumpeter Lucienne Renaudin-Vary.

Since its foundation as one of the England’s oldest professional chamber orchestras, The London Chamber Orchestra performed pieces of world famous artists for the first time and continues to leave its signature on premieres with today’s composers.

While Lucienne Renaudin-Vary is this year’s winner of France’s most prestigious classical music award Les Victoires de la Musique Classique, in the category “Greatest New Discovery”, pianist Daniel Kharitonov won the third place in the 15th International Tchaikovsky Contest in 2015. Kharitonov is part of the Mariinsky Theatre Orchestra, Tchaikovski Symphony Orchestra and since he was 12, of the Moscow Virtuosos Chamber Orchestra as a constant member.

Another great, world-embracing and award winning orchestra staring at the festival will be the Zurich Tonhalle Orchestra (Tonhalle Orchester Zürich). Conducted by Lionel Bringuier, one of today’s most active and young maestros, the orchestra will perform two different programmes at D-Marin Turgutreis Main Stage. Zurich Tonhalle Orchestra’s first concert on Thursday 25 August, at 09:00 pm will be accompanied by Gautier Capuçon, who is considered one of today’s most valuable cellists.

Europe’s famous and essential music institution Zurich Tonhalle Orchestra unites more than 100 professional musicians from 20 different countries. Founded in 1868, the orchestra has given many concerts with important names such as Rudolf Buchbinder, Alfred Brendel, Gidon Kremer, Sabine Meyer, Joshua Bell and Yo-Yo Ma.  Since the season of 2014-2015, the orchestra continues to work with the new music director and maestro Lionel Bringuer.

Cellist Gautier Capuçon is best known for winning the “Best Talent of the Year” prize at the 2001 André Navarra Awards. In 2004, after winning the Borletti-Buitoni Foundation Award, the artist continued to be considered worthy of many Echo Classic awards. He played with maestros such as Sir John Eliot Gardiner, Kirill Petrenko, Gustavo Dudamel and Charles Dutoit at the concerts where he took part with Berlin Philharmonic Orchestra, Royal Concertgebouw, Staatskapelle Dresden, New York Philharmonic Orchestra and Boston Symphonic Orchestra. By founding "Classe d'Excellence de Violoncelle", where he directs and tutors future talents, Capuçon continued to be a muse to young and talented cellists from all around the world.

At their second concert, which will take place at D-Marin Turgutreis Main Stage on Friday 26 August, 09:00pm, the Zurich Tonhalle Orchestra will accompany the recently shining star of classical music, violin virtuoso Patricia Kopatchinskaja for her Tchaikovsky Violin Concerto. Her album with an interpretation of this concerto was released last year and became the most popular classical album of 2015. As an active soloist, she continued her orchestral and chamber music practices. Only this season she has been sharing the stage with Staatskapelle Berlin, La Chambre Philharmonique, Chamber Orchestra of Europe, Houston Symphony and Seattle Symphony Orchestras.

One of the masterpieces of world famous pianist Fazıl Say, the Nâzım Oratorio will be live on stage on Wednesday 24 August, 09:00pm at D-Marin Turgutreis Main Stage with narrator soloist Genco Erkal and soloists Serenad Bağcan, Arda Aktar, İdil Bursa, Gökçe Çatakoğlu and Çetin Özen. Composed by Say in 2001, this masterpiece of polyphonic music in Turkey consists of five different parts and will be performed in cooperation with Bilkent Symphony Orchestra directed by Ibrahim Yazıcı. Founded in 2015, Nâzım Hikmet Choir will be joining this magnificent concert with its young and dynamic group under the music directorship of Fazıl Say.

Sunset and Morning concerts which meet the audiences’ great admiration remain also part of the 12th edition of the festival. The programme will be enlivened by the performances of Triopax, Ferhat Can Büyük, Çellistanbul, Emre Engin, Cansın Kara and Oxana Shevchenko, Boğuç Fagot Quartet and also Mavi Quintet with the lead of Aziz Baziki, Ayşe Şenogul, Mehmet Ariç, Ezgi Anıl.

International D-Marin Classical Music Festival will expand from D-Marin Turgutreis and Bodrum Castle to many other venues in Bodrum: Gümüşlük Academy, Gümüşlük Eklisia Church, TURSAB Culture Center and Şevket Sabancı Park. Classical music will be carried on through diverse activities on the Festival programme between 20 and 27 August. Workshops for children coordinated by Sahne İstanbul, open air movie screenings, Food Atelier with d.ream Academy and tales for adults will have their place on the calendar of every follower of the festival. Plus, through mixed exhibitions curated by Gaia Gallery, everyone will have the chance to experience Bodrum’s culture, art and music.

Tickets for the 12th International D-Marin Classical Music Festival are on sale at Biletix Sale Points, Biletix Call Center and Biletix website. As of July 11, tickets are available at D-Marin Turgutreis box office.  All of the festival’s revenue will be donated to Tohum Autism Foundation and Bodrum Health Foundation. 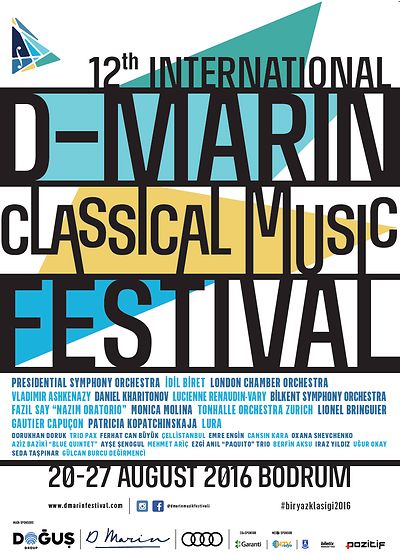