In September the Polish tenor Piotr Beczała brings all the atmosphere of opera to the Ljubljana Festival. The end of the summer will also feature two remarkable dance events. The SNG Opera & Ballet Maribor will bring Lord Byron's poem to life with the ballet Le Corsaire, while the Eifman Ballet from St Petersburg returns to the Ljubljana Festival with a performance of Up and Down, which will close this year's festival on 13 September. Two world-famous orchestras are also coming to Ljubljana: the Royal Concertgebouw Orchestra from Amsterdam with conductor Daniele Gatti, and the Shenzhen Symphony Orchestra from China. And to ensure a relaxed festival atmosphere, the programme also includes a performance by avant-garde group Laibach in concert with the RTV Slovenija Symphony Orchestra.

Its string section has been called "velvety", the sound of the brass "golden", the timbre of the woodwinds "distinctly personal" and the percussion have an international reputation – these are the attributes of the Royal Concertgebouw Orchestra, one of the world's finest orchestras. In the opinion of many connoisseurs, the acoustics of its home venue, the Concertgebouw in Amsterdam, are the best in the world. As well as 80 concerts performed here, the RCO gives 40 concerts at leading concert halls throughout the world each year. Since its foundation in 1888, the orchestra has been led by a succession of outstanding conductors, among them famous composers such as Gustav Mahler and Richard Strauss. With effect from the 2016/17 season, the chief conductor of the RCO is Daniele Gatti, who until this year was the music director of the Orchestre National de France. Before that he served as principal conductor of the Royal Philharmonic Orchestra, chief conductor of the Zurich Opera, music director of the Orchestra del Teatro Comunale in Bologna and principal conductor of the Orchestra Dell'Accademia Nazionale di Santa Cecilia in Rome, among other appointments. Together with the RCO he will present a programme of remarkable colour, frequent changes of tempo and unconventional musical forms and harmonies. The programme includes two works originally written to accompany ballets (Jeux and Petrushka) that were premiered in the early twentieth century by Diaghilev's famous Ballets Russes, featuring the legendary dancer and choreographer Nijinsky. (1. 9.)

From faraway China comes the Shenzhen Symphony Orchestra, which since its founding in 1982 has worked with numerous eminent artists, including composer and conductor Tan Dun, who has appeared before Slovenian audiences in both roles several times, most recently as a guest of the Ljubljana Festival at the opening of last year’s festival. The orchestra performs here with the Chinese virtuoso violinist Chen Xi, who won the Lipinski-Wieniawski International Competition for Young Violinists at the age of just 15 and took a dazzling top prize at the prestigious International Tchaikovsky Competition in Moscow at 17. With the introductory symphonic poem by the Chinese composer Xu, the orchestra will conjure up the tonal palette of the Chinese musical tradition. The varied programme also includes a concertante work by the great Finnish symphonist Sibelius and the famous symphonic suite by the Russian master of orchestration Rimsky-Korsakov. The orchestra will be conducted by DaYe Lin, the winner of the 2012 Sir Georg Solti International Conducting Competition in Frankfurt. Lin studied in Berlin under Christian Ehwald, who together with Uroš Lajovec is responsible for the artistic direction of the Shenzhen Symphony Orchestra. (8. 9.)

RTV Slovenia Symphony Orchestra will appear with the Polish tenor Piotr Beczała, who is renowned for the beauty of his voice and his exceptional interpretations of the roles he performs. In the 2015/16 season alone he sang Edgardo in Lucia de Lammermoor at the San Francisco Opera, the Duke in Rigoletto at the Metropolitan Opera in New York and Werther at the Opéra National de Paris. He also appeared in Un ballo in maschera at both the Bavarian State Opera and the Vienna State Opera and sang the title role in Wagner's Lohengrin opposite Anna Netrebko at the Semperoper Dresden. In addition to his operatic roles Beczała also gives regular concert performances at major festivals and important concert venues. In Ljubljana he will offer a selection of arias from the most famous French and Italian operas of the nineteenth century. The RTV Slovenija Symphony Orchestra, which this year celebrates its 60th anniversary, will be conducted by the French maestro Marc Piollet, who has enjoyed a rich career conducting opera in the world's most prestigious opera houses and is also frequently heard conducting the symphonic repertoire. (6. 9.)

To make the summer even more relaxed

Following their successful concert with the RTV Slovenia Symphony Orchestra in the famous Henry Le Boeuf Hall of the BOZAR arts centre in Brussels on 9 February, the group – accompanied by symphony orchestra and mixed choir – has prepared an expanded programme for their appearance at Križanke. The first part of the concert will include the premiere performance of a brand-new work, a 30-minute original composition based on France Prešeren’s Baptism By The Savica, set in the period of the conversion of Slovenes to Christianity and the battles between Christians and pagans. Laibach performed this work for the first time at the Ultima Contemporary Music Festival in Oslo in 2014. The Ljubljana performance of the two works coincides with the 30th anniversary of the staging of the “retrogarde event” Baptism Below Triglav by the Sisters of Scipio Nasica Theatre, to which Laibach contributed the soundtrack. In the second part of the concert, Laibach will present a selection of the pieces they performed in Brussels with the RTV Slovenia Symphony Orchestra, this time in arrangements for an even larger orchestra (“Smrt za smrt”, “Eurovision”, “Now You Will Pay”, “Whistleblowers”, “We Are Millions And Millions Are One”, “Resistance Is Futile”, “Opus Dei/Leben heisst Leben”). Like all Laibach concerts, this will be a multivisual event accompanied by stunning film projections. Orchestrations are by the young Slovene composer Anže Rozman. The orchestra will be conducted by Simon Dvoršak. (2. 9.)

A summer of dancing

Written in 1814, Byron's tale in verse The Corsair evinces the romantic interest in exotic places where time seemed to stand still in the infinity of the moment and where even the greatest fantasies could come true. This spirit is personified in the poet's work by the figure of Conrad, a ship's captain who has been banished from society and forced to become a pirate. A sudden twist of fate – the kidnapping of the beautiful Medora, with whom Conrad has fallen in love – sees the two lovers face a stern new test. In order to rescue Medora and free her from a life of slavery, Conrad and his friends plan an attack on Seyd Pasha's harem and set off on an exciting adventure. The romantic ballet based on Byron's verse-tale was created by Jules-Henri Vernoy de Saint-Georges in 1855 and orginally choreograped by Joseph Mazilier to music by Adolphe Adam, who had already won acclaim with his original music for the ballet Giselle fifteen years earlier. The first integral production of the ballet in Slovenia was staged in Maribor in April this year, with choreography by the renowned Latvian ballet director, choreographer and dancer Aivars Leimanis. (7. 9.)

The Eifman Ballet from St Petersburg returns to the Ljubljana Festival with a performance of Up and Down, which will close the 64th Ljubljana Festival. Boris Eifman is one of the world's greatest choreographers who has created his own unique ballet universe. He is justly known as a "choreographer-philosopher", but a more subtle definition that accurately captures the aesthetic individuality of the great maestro would be a "choreographer-psychoanalyst". Rightly believing that the tools of ballet open up truly unlimited research opportunities to the dance creator, Eifman plunges into the unknown depths of the inner worlds of his characters and penetrates the most hidden corners of their subconscious. The ballet Up & Down is the quintessence of the choreographer's psychoanalytic research. In this love story set in the early 20th century, Boris Eifman repeatedly confronts psychological themes and delves into the realms of mental illness, destructiveness and the subconscious.  The ballet features the music of Alban Berg, Franz Schubert and George Gershwin. (12. - 13. 9.)

The Ljubljana Festival thanks its founder, the City of Ljubljana, for the support. 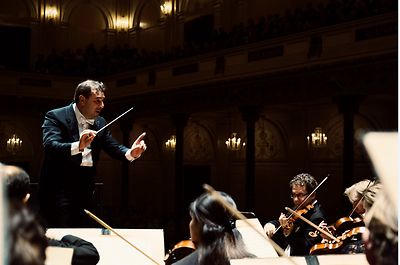