As one of many ways to encourage and support the production of contemporary music, the Music Biennale Zagreb embarked on a new adventure which is already becoming a tradition – the first competition of 5-minute forms.

They started with opera during the last edition and the Polish composer Martyna Kosecka, who won the Competition, will open the 29th MBZ with the premiere of her opera Klothò which was comissioned by MBZ. This year the 5-Minute Piano Concerto Competition is launched, for which they received all together 182 applications from countries from all parts of the world.

The international jury – Johannes Kalitzke (composer and conductor, Germany), Berislav Šipuš (composer and conductor, Croatia) and Daan Vandewalle (pianist, Belgium) worked intensively last weekend to choose the 10 most successful scores which will be performed at the Competition Finals at the 29th MBZ.Besides the jury, the audience will have a vote as well in the Competition. The winner will receive a commission of a full-scale piano concerto, which will be premiered at the next MBZ.


According to the Jury members, all ten finalists differ stylistically which will result in an interesting concert at the 29th MBZ! The finalists are:

You can read the Jury Comments about the applications and the process of making music in general on the MBZ website. 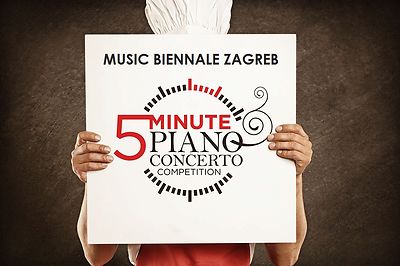