Grigory Sokolov opens the Festival on 19 November with a solo recital comprising works by Robert Schumann. On 20 November, the Day of the Keyboard, will focus on the tradition of the Russian Piano School, presenting three young pianists who were all born in the former Soviet Union: Georgy Tchaidze, Alexej Gorlatch, and Nareh Arghamanyan. They will perform works ranging from Mikhail Glinka, the Founding Father of Russian art music, to Stravinsky, Scriabin, and Prokofiev. In his Piano Lecture, Martin Meyer will expound on the historical and theoretical background of the Russian Piano School Piano. He will give an additional lecture (on Alfred Brendel) on Saturday, 26 November.

On 21 November Cameron Carpenter takes the stage with his International Touring Organ. Along with repertoire originally written for the organ, he will play such works as Scriabin’s Piano Sonata No. 4, which he has arranged for his high-tech instrument. In a separate event he will introduce children to the world of the organ. Igor Levit’s recital on 23 November will be devoted to Johann Sebastian Bach’s Goldberg Variations.

The Piano Festival will also feature two Piano Concert programs. In the first, on 24 November, Maria João Pires celebrates the 40th anniversary of her Lucerne Festival debut with a performance of Schumann’s Piano Concerto in A minor, joined by Trevor Pinnock and the Kammerorchester Basel.

On 25 November, Murray Perahia appears as both pianist and conductor for the second Piano Concert, in which he will lead the Academy of St Martin in the Fields and perform Beethoven’s First and Third Piano Concertos. On 26 November

Rudolf Buchbinder will give a recital of works by Robert Schumann and Franz Liszt. The 2016

Debut series presents the Swiss pianist Louis Schwizgebel and the Americans Andrew Tyson and Kit Armstrong. Concluding the Festival will be a chamber music program on 27 November in which the pianist Lars Vogt joins with the violinist Veronika Eberle, the violist Florian Donderer, and the cellist Tanja Tetzlaff to perform three masterpieces by Johannes Brahms. From 15 to 18 November, the American Robert Levin will lead the master class in piano, which is being presented in cooperation with the Hochschule Luzern – Musik.

Piano Off-Stage brings eight renowned jazz pianists to restaurants and bars throughout Lucerne from 22 to 27 November: Vince Benedetti, Luca Filastro, Jean-Baptiste Franc, Christina Jaccard, Simon Mulligan, Frank Muschalle, Ricardo Regidor, and Christof Sänger is this year’s lineup. They will all be introduced at the Off-Stage opening event on 22 November in the Luzerner Saal. Admission is free for all Off-Stage events.

Online ticket can be found at www.lucernefestival.ch 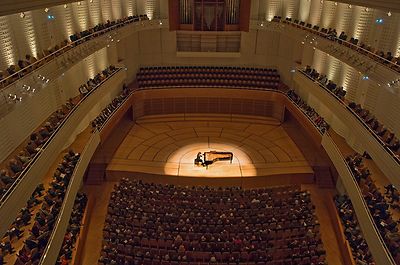