Jazzfest Berlin: New Programme and Old Problems – Dialogue in Music and Beyond

The 53rd Jazzfest Berlin will for the first time be opened by Federal Government Commissioner for Culture and the Media Prof. Monika Grütters MdB - on 3 November at Haus der Berliner Festspiele.

This year, the Berliner Festspiele is staging the 53rd Jazzfest Berlin in an “extended version” format from 1 to 6 November that includes two pre-concerts. On 1 November Matana Roberts presents “For Pina”, a performance that is part of the current Pina Bausch exhibition at the Martin-Gropius-Bau and features Berlin-based musicians in a reconstruction of the famous Lichtburg rehearsal room. On 2 November singer Michael Schiefel and Wood & Steel Trio perform “Songs out of Exile” showcasing Hollywood songs by Hanns Eisler at the Institut Francais. The new venues, reflective surfaces and constellations of musicians, in particular the combination of international and Berlin-based artists, all enable new forms of “conversation” that are continued in the further concert programmes of the 2016 Jazzfest Berlin.

The festival’s opening concert, which takes place for the first time in the presence of Federal Government Commissioner for Culture and the Media Prof. Monika Grütters MdB, sees a musical encounter between alto saxophonist Anna-Lena Schnabel and the Julia Hülsmann Quartett. Also on the programme for that evening is young saxophonist Mette Henriette from Norway with her ensemble – also a premiere – and trumpeter Wadada Leo Smith with his Great Lakes Quartet.

At the press and audience discussion (18 October) with music by Eve Risser and Alexander von Schlippenbach with Axel Dörner, artistic director Richard Williams introduced the programme for this year’s festival. This year, 12 of the 22 jazz formations scheduled to perform will be led by women. A discussion concerning this issue took place on 18 October that referred to the study “Frauen in Kultur und Medien” (Women in Culture and Media), which was presented on 28 June 2016 by Minister of State for Culture Prof. Monika Grütters, as well as the BKM (Federal Ministry for Culture and the Media) Jazzstudie 2016 (Jazz Study 2016), which was published in March 2016 – all of this points towards jazz increasingly becoming a matter of the state.

Fransziska Buhre “The women are here, but how can we succeed in making them visible through mixed teams and balanced programming? It’s a matter of systemic marginalization. This concept highlights the fact that the problem cannot be attributed to one aspect, such as sexism, but to a series of aspects, such as language, aesthetics and structures, that have to be actively dealt with.”

Dr. Wolfram Knauer “I find a quota system for a concert programme problematic, but it is essential that more women make programmes, of clubs and festivals, that more jazz institutes are directed by women. And juries, damn it, must have equal representation – it shouldn’t be any other way in the year 2016.”

Nikolaus Neuser as IG-Jazz representative also sees the point of departure as lying precisely here, in a quota system at the decision-making level, but that music, the art itself, must be free of any quota system.

Even if artistic self-perception is free of gender questions, as singer Lucia Cadotsch formulated it, and the question of relevance and quality of music has to function well away from any quotas, it is the history of jazz itself that is so shaped by male dominance that a quota system for programme design is essential in order to facilitate a rethink, said Gregor Hotz from the “ausland” club.

The discussion was livestreamed on Periscope and the Jazzfest Berlin’s Facebook page (can be downloaded indefinitely) and excerpts will also appear on the Berliner Festspiele’s BLOG. In addition, a recording of the evening is available on Voice Republic. 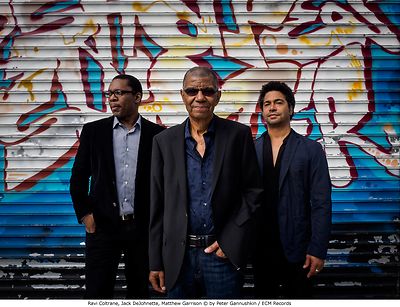