EFA Secretary General Kathrin Deventer had the chance to participate at the IV International Cultural Forum in St. Petersburg/Russia on 2 December 2016. At the invitation of the Director of the Sochi Winter International Arts Festival, Mr Dmitry Grinchenko, EFA had a platform to present its work to a group of Russian festival makers, concert hall directors, ensembles, the European Commission, mayors and representatives of the Russian federal and regional governments. With more than 500 participants, the Cultural Forum aimed at bringing together the cultural players in Russia to discuss collaborations and development opportunities. In her presentation, Kathrin introduced the history of EFA, its timeless efforts to bring festival makers closer together to collaborate, and its activities including educational trainings and information sessions which improve the organizational opportunities of the festival community. Please have a look at her speech. Let EFA (info@efa-aef.eu) know if you are interested in Russian artistic and festival life so that we can bring you in touch with our colleagues.

EFA today has three members from Russia, including the Sochi Winter International Arts Festival. Sochi is celebrating its 10th anniversary next year, and is developing into a strong meeting point for artists, professionals and international guests each year during the month of February. EFA will hold its Festival Readings in Sochi for the second time in 2017. 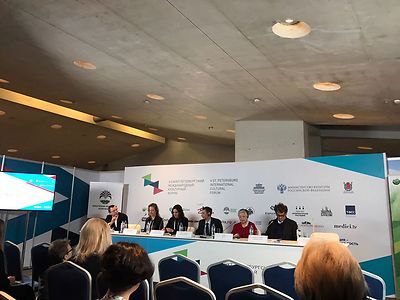