Productive days in Antwerp: the second Edition of the Festival Production Management Training programme kicked off

Yesterday, 18 January 2017, the second edition of the Festival Production Management Training programme opened with 15 young production managers from across the globe, at deSingel International Arts Campus in Antwerp, Belgium. Organised by The Festival Academy (an initiative of the European Festivals Association), this new training programme allows participants to exchange with expert production managers on their experience and the challenges of realising an artistic work. The group was welcomed by Jerry Aerts, Director deSingel International Arts Campus, and Inge Ceustermans, Managing Director The Festival Academy.

The four-day programme is the first module of three. Module II gives participants the opportunity to practise their skills with a placement at a prestigious festival from across the world, while Module III will reunite the participants at a closing conference to reflect on their experiences and growth.

The core element of the Festival Managers Production Training is the exchanges between the fellow production managers. 15 young production managers from 11 countries will meet and share their experiences. These connections are sure to take them to new places, both metaphorically and literally.

“The Festival Production Management Training is first and foremost about sharing: sharing your ideas, knowledge, and experiences. It is a space where you will confront the views of others with your own. You will learn a lot from the presenters, your colleague festival managers, and the team of deSingel. But also think about what you can offer, what you have to give, what people can learn from you.”– Inge Ceustermans. Read the full speech here.

Expert guidance from renowned production and festival managers throughout the FMPT

Renowned production managers and artists will not only be giving presentations, but they will also exchange with participants in working sessions and informal moments throughout the four days.  Roy Luxford, Planning and Operations Director of the Edinburgh International Festival, will attend the full four days. Roy has a wealth of experience, having previously held roles including Executive Director of Cheek by Jowl and the Michael Clark Company, the Programme Manager at Sadler’s Wells Theatre and the Peacock Theatre, and General Manager of DB8 Physical Theatre amongst others.

Annet Lekkerkerker, Managing Director of the Holland Festival, will also share her rich experience. Since 2009 she has collaborated with artistic directors Pierre Audi (until 2014) and Ruth Mackenzie (since then). Annet previously worked as Head of Programming at the Stadscchouwburg Amsterdam. She currently sits on various boards and chairs of the Amsterdam Cultural Coalition. 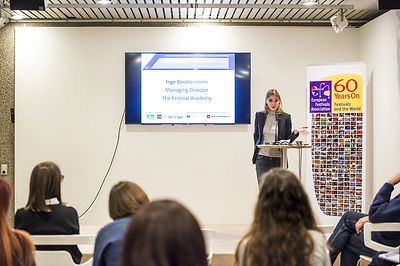