The Festival Academy (an initiative of the European Festivals Association) is delighted to launch the call for applications for a new programme, the first Atelier for Young Festival and Cultural Managers. This programme is set up and developed by The Festival Academy and the China Shanghai International Arts Festival.

All partners involved are delighted to open the global call for application for this first Atelier for Young Festival and Cultural Managers to take place in Shanghai, China, from 17 until 23 October 2017.

Get to know our host: China Shanghai International Arts Festival

China Shanghai International Arts Festival (CSIAF) is a state-level annual international arts festival hosted by the Chinese Ministry of Culture and undertaken by the Shanghai Municipal People’s Government. Since 1999, more than 1000 units including arts festivals, theatres, agencies, performing groups and professionals from about 100 countries and regions have attended the China Shanghai International Arts Festival becoming a flagship project for cultural exchange of the country as well as one of the most influential festivals in the international art circles. The Atelier Shanghai 2017 will be the first activity organised by The Festival Academy / EFA between EFA, the cultural sector in China, the European Commission and the People’s Republic of China which goal is supporting the development of culture in Europe and China within a global cultural reality. The Festival Academy and EFA have the ambition to continue this collaboration in the next years. 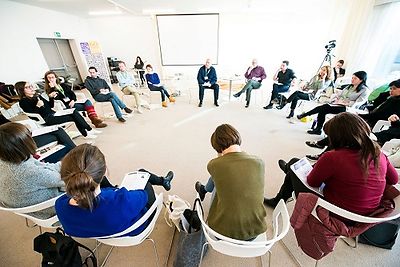