The Merano Music Weeks - A must not only for classic fans

In more than three decades the Merano Music Weeks – the premium festival for connoisseurs – have developed into an outstanding and genre overlapping music event.

The concert calendar with the different series such as classic, baroque, colours of music, matinée classique and vox humana shows us  this year again that the südtirol classic festival is one of the highlights between the international classic festivals.

The whole world plays in Merano – and this nobody can take for granted. But the health resort at the river Passirio offers apart of Mediterranean vegetation and alpine pastures  unique locations: the Kursaal in Art Nouveau, or the Knight’s Hall in Castle Tyrol, the  Municipal Theatre, the Pavillon des Fleurs, the Museum Palais Mamming, Castle Schenna and the Parish Church in Lana with its Schnatterbeck altar a masterpiece of the Gothic period in Southtyrol.

The main stress is again on the symphonic programme: On 23rd August the Baltic Sea Philharmonic  opens the festival conducted by Kristjan Järvi and the Russian „prodigy infant“ Alexander Malofeev as piano soloist. To be followed by the Asian Youth Orchestra under James Judd (piano: Gerhard Oppitz), the Academy of St. Martin in the Fields with Daniel Hope as conductor and soloist, the conductor Teodor Currentzis – the rebel within the international classic scene – with his orchestra MusicAeterna, the NDR-Elbphilharmonie Orchester Hamburg under Juraj Valcuha, the Mahler Chamber Orchestra conducted by Rafael Payare (soloist: Patricia Kopatchinskaja) and last but not least the Philharmonia Orchestra London with Esa-Pekka Salonen.

The symphonic programme is of course the centrepiece of the Merano Music Weeks but also all the other concerts are of top-quality. The 32nd edition of the südtirol classic festival puts the main emphasis on the baroque music with the violinist Kristóf Baráti, the titular organist in the Elbe Philharmonic Hall, Hamburg  Iveta Apkalna, the soprano Simone Kermes who presents in the Merano Kursaal her music project „Love“ and she will be accompanied by the Italian baroque ensemble La Magnifica Comunità and the ensemble  4 Times Baroque.

The night concert with Ute Lemper („Last Tango in Berlin“) leads the audience to Berlin during the Weimar Republic, then to Paris and to Buenos Aires and Hannelore Elsner will take us with her on a journey through the centuries with poetry and music. As you can see – the 32nd edition of the Merano Music Weeks offers such a lot – and not only to classic fans – so don’t hesitate and join the festival! 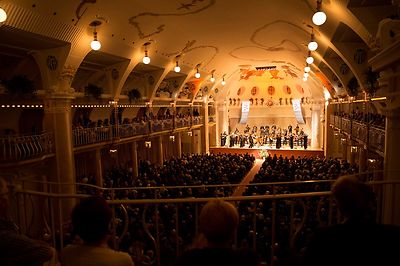