The 21st Ludwig van Beethoven Easter Festival will take place in Warsaw between 2 and 14 April. Fifteen symphonic concerts and 2 chamber concerts are on offer over the 13 days of the Festival. Elżbieta Penderecka, the general director of the Festival, invited some excellent Polish and foreign philharmonic orchestras as well as an array of internationally acclaimed soloists. The theme of this year’s edition: “Beethoven and the Fine Arts”, which runs throughout the concert programs, will allow the audiences to hear a large number of musical works, among others by Mussorgsky, Rachmaninov, Stravinsky, Karłowicz, Reger, Martinů and Hindemith, which have been inspired by paintings.

The Festival will open with the Deutsche Radio Philharmonie Saarbrücken Kaiserslautern under Maestro Josep Pons, who will conduct Rachmaninov’s Isle of the Dead, Op. 29 and the Festival patron’s Symphony No. 7 and Piano Concerto No. 5. The soloist will be the exciting young Spanish pianist Javier Perianes. Alexander Liebreich with the Polish National Radio Symphony Orchestra in Katowice will present a concert version of Stravinsky’s opera The Rake’s Progress, inspired by William Hogarth’s paintings. The solo parts will be performed by Andrew Strooper (Tom Rakewell), Louise Alder (Anne Trulove), Krzysztof Szumański (Nick Shadow) and Anna Lubańska (Baba the Turk, Mother Goose). The Wiener Akademie Orchestra conducted by its founder and music director Martin Haselböck will perform works by Beethoven, including Incidental Music for J.W. Goethe’s drama “Egmont” with the participation of soprano Marie Arnet and actor John Malkovich as the narrator. Conductor Massimiliano Caldi will conduct Puccini’s lesser known symphonic works and excerpts from his operas La rondine and La bohème. The soloists will be soprano Ewa Vesin and tenors Edgaras Montvidas and Leopoldo Lo Sciuto. The “Unknown Operas” series, which has been presented since 2008, will feature the Polish premiere of Bizet’s Djamileh, preceded by the composer’s rarely performed juvenile symphony. The concert will be led by Łukasz Borowicz, and the solo parts will be performed by Jennifer Feinstein, George Mosley and Eric Barry. The Festival will close with Brahms’ Ein Deutsches Requiem under the baton of Leopold Hager with outstanding soloists: soprano Marlis Petersen and baritone Thomas Bauer.

Among the most eagerly awaited concerts are performances by Hong Kong Sinfonietta under Yip Wing-sie and the State Youth Orchestra of Armenia under Sergey Smbatyan. Other Festival concerts will be conducted by such masters of the baton as Lawrence Foster, Hubert Soudant, Michail Jurowski. We will hear renowned pianists Simon Trpčeski, Anika Vavić, Julia Zilberquit, Elena Bashkirova; violinists Tseng Yu-Chien, Emmanuel Tjeknavorian, Patrycja Piekutowska; cellists Amit Peled and Narek Hakhnazaryan; and trumpeter Támas Pálfalvi. Members of the Storioni Trio will be soloists in Beethoven’s Triple Concerto performed by Sinfonietta Cracovia under Jurek Dybał. There will also be a recital by Veriko Tchumburidze, winner of the recent International Henryk Wieniawski Violin Competition.

In keeping with tradition, the main concert programme is complemented by regular accompanying events: the Exhibition of Musical Manuscripts at the Jagiellonian Library, the International Symposium addressing the 21st Festival’s theme, and Prof. Arie Vardi’s piano master classes.

The 21st edition of the Easter Festival is announced by Ewa Juszkiewicz’s poster. 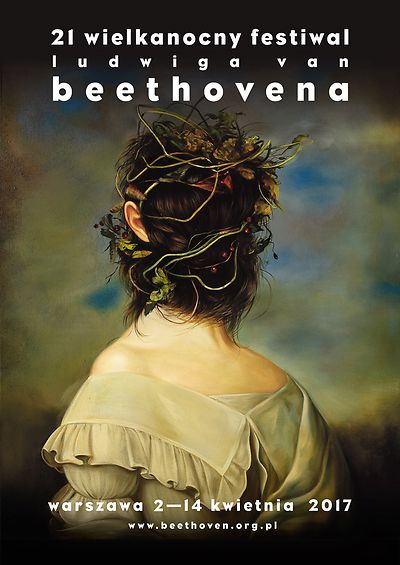