On 5 May, the European Festivals Association concluded its Arts Festivals Summit 2017 hosted by the Rheingau Musik Festival with a great success. 230 festival makers (EFA Members, EFFE Label Festivals and Atelier Alumni) met in Wiesbaden at the invitation of Mr. Michael Herrmann and his Rheingau Musik Festival team for 3 intense days of inspiring exchanges with colleagues and friends from all over the world.

At the Arts Festivals Summit Europe’s 715 remarkable Festivals 2017-2018 received the EFFE Label in the presence of European Commission and Parliament. On behalf of the EFFE International Jury Sir Jonathan Mills delivered the keynote speech. Last but not least the EFA members elected a new President, Governor Jan Briers of the Federation of Music Festivals in Flanders, who becomes EFA’s 6th president since 1952. Also his colleague board members were elected during the General Assembly with some new faces as well as experienced board members. It also was the occasion to honour EFA’s longstanding President Darko Brlek, who left the function as president after 12 years.

The Summit discussed the hot topics of festival making: new audiences and connecting different cultures through festival programming, cultural diplomacy, new business models and the work with both established and emerging artists. “We have insisted that artists be fluent in the language of bureaucracy; instead we should insist that bureaucrats learn the language of poetry” as Sir Jonathan Mills said provocatively in his keynote speech.

On behalf of the EFA Board and Team, the European Festivals Association thanks Rheingau Musik Festival’s Director Michael Herrmann and his team for their hospitality and the excellent organization of the 3 days in the Rheingau. The Summit showed the international participants coming from more than 40 countries the best that the Rheingau region has to offer: beautiful sights from Schloss Vollrads, the astonishing Casino Gesellschaft in Wiesbaden, the amazing Hillary Hahn in the Frankfurter Alte Oper and delicious wine in Kloster Eberbach as well as Schloss Johannesberg.

During the formal General Assembly on 5 May in the Hessischer Landtag, the first time that the parliament opened its doors to non-parliamentarians, the members elected a new board, Vice-Presidents and President, Governor Jan Briers (President of the Federation of Music Festivals in Flanders). We also welcomed back Semana de Música Religiosa de Cuenca to the EFA Family.

The Assembly concluded with the announcement of the Arts Festival Summit Ljubljana from 11-14 April 2018, hosted by Darko Brlek and his team of the Ljubljana Festival. Please save the date. 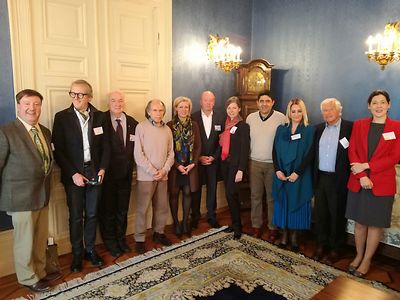