Classical:NEXT - Taking The Lead Together

Rotterdam once again became the home of classical and art music professionals of all sectors for the sixth edition of Classical:NEXT. 1,200 professionals attending from 45 countries and an all-time high of approximately 300 exhibiting companies in the Expo. Many EFA members and EFFE Label Festivals attended the meeting. During the  off C:N Showcases, MusMa (partnered with the European Festival Association and European Broadcasting Union) presented the first collected performance of five specially-commissioned 2017 works, performed by Amôn Quartet from Belgium.

The four-day event was book-ended by Wednesday's celebratory Opening with a performance by Chineke! Orchestra and Saturday's concluding presentation of the Classical:NEXT 2017 Innovation Award, chosen by online vote open to all delegates, which went to the South African Buskaid project, with Molyvos International Music Festival, Greece, and PODIUM Festival, Germany as runners-up.

The Award was selected by an online vote of all delegates on a shortlist, selected by international journalists and industry experts. Close runners-up accolades were also awarded to Molyvos International Music Festival in Greece – a festival which was started in 2015 on the island of Lesbos amidst the economic crisis and a wave of Syrian refugees arriving on the island – as well as Germany's PODIUM Festival Esslingen, whose founder and director Steven Walter said in his acceptance speech: 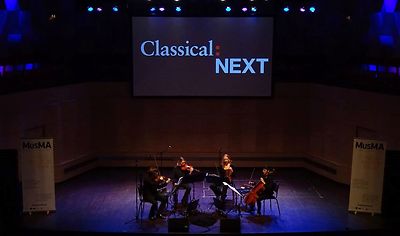