EFA was present at the opening of the 56th edition of the Semana de Música Religiosa de Cuenca (Cuenca Religious Music Week) on the 8th April 2017.

This edition had the support of RTVE, which recorded and broadcasted the concerts and the Orquesta Sinfónica y Coro RTVE also being one of the resident companies of this edition of the festival. This is undoubtedly an important support for a city with its Historic Walled Town being a UNESCO World Heritage and hosting one of the most important Religious Music festivals in Europe.

The new Artistic Director, Cristobal Soler prepared this 56th edition (the first under his lead) with care and sensibility creating a real intergenerational experience in terms of both the audience that filled the concerts and the free concerts in the city, as well as with the performers with the stage being given to the young talents of the SMRC Academy

The intention to develop these talented young professionals is as great at the will to make known to a broader audience pearls of religious music which have never been performed. This makes them simultaneously heritage pieces and world premieres!

On the path of going towards the audience another very interesting initiative was the publication of a book with extensive information on the several performances and composers featured in this edition. You can read the English translation of the texts here.

On the 8 April we had the pleasure of attending the opening of the festival as well as the Spanish premiere of the chamber opera Il giardino della vita by composer José María Sánchez Verdú with a libretto by Gilberto Isella.

On the 9 April we joined the SMRC Academy in the city where they performed in the frame of the Easter celebrations. 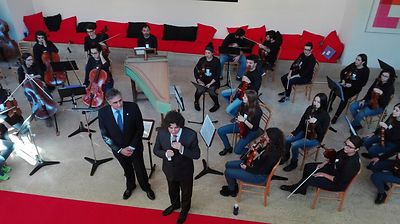